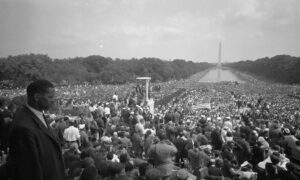 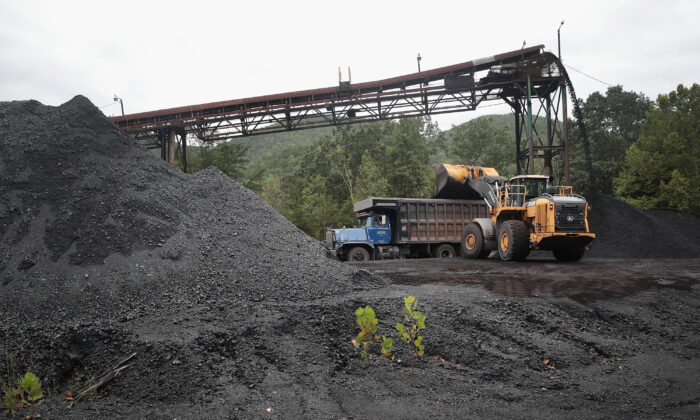 A truck is loaded with coal at a mine near Cumberland, Ky., on Aug. 26, 2019. Eastern Kentucky, once littered with coal mines, is seeing that lifeblood rapidly slip away. (Scott Olson/Getty Images)
Viewpoints

The infrastructure bill the Senate passed on Aug. 10 discriminates against whites at every turn.

Americans are enthusiastic about spending money on infrastructure—bridges, roads, broadband, and green technologies. But this racist bill locates and hands out jobs and contracts projects based on race, not merit. Minority businesses and neighborhoods hold the inside track. If you’re white, you’re low priority.

The same is true for the bill’s proposals to improve traffic patterns in cities. Contractors and subcontractors get priority only if they’re owned by minorities or women. White male business owners can take a hike. (Section 11509)

Americans should be outraged, but not surprised. After all, President Joe Biden’s American Rescue Plan Act, which passed in March, also put into place an ugly system of discrimination against whites. It offered debt relief to black farmers, but not white farmers. Another provision offered billions in aid to minority-owned and women-owned restaurants, but it told struggling restaurants owners who happened to be white men that they had to go to the back of the line.

The injustice was obvious. White male farmers and restaurant owners are suing, claiming the anti-white provisions are unconstitutional. So far, they’re winning. In every case, federal judges have halted the race-based programs in the American Rescue Plan Act until the challengers have their day in court. Politico reported last week that Biden’s Justice Department may fold without a fight on the black farmer debt relief cases because the law is not on their side.

You’d think Democrats and the Biden White House would get the message. Instead, they’re doubling down on rigging legislation and divvying up taxpayer dollars to benefit minorities and shortchange whites.

Chances are high that the infrastructure bill’s hodgepodge of anti-white discrimination will be struck down by federal courts. In 1989, the Supreme Court ruled that the Equal Protection Clause of the Constitution bars the government from trying to even the score by discriminating against whites and in favor of minorities. The justices warned against creating “a patchwork of racial preferences based on statistical generalizations” to correct past injustices. That’s precisely what this infrastructure bill does.

The bill’s backers would have you believe that obsolete airports, dilapidated public works, and deteriorating roads and public spaces are evidence of racial injustice. Rep. Yvette Clarke (D-N.Y.) rails that “our infrastructure is racist” and calls on Congress to pass a bill that “puts the needs of underserved and disadvantaged communities at the fore.”

That’s code for minority communities. But the truth is there are plenty of poor white people in this country, too, and poor, predominantly white communities could benefit from a bold, federal infrastructure initiative. Race and ethnicity should have nothing to do with it. Locate the projects and put the funds where the economic need is greatest, regardless of race.

West Virginia has the lowest average income in the nation and ranks 46th in internet connectivity. Maine ranks 36th out of 50 states for income and 34th in broadband connectivity. People in these states could really benefit from federal broadband assistance. Here’s the hitch: The infrastructure bill tilts the scale in favor of states with high minority and non-English speaking populations instead of considering economic need and existing broadband capacity (Sections 60304 and 60305). Because Maine and West Virginia are 94 percent white, they’ll get less.

Polls show that Americans favor fixing roads, bridges, tunnels, and airports. They know that good infrastructure promotes economic growth. What they’ve been kept in the dark about is the fine print in Sen. Chuck Schumer’s bill. Under the guise of upgrading the nation, the bill unfairly favors black and brown Americans and treats whites like second-class citizens.