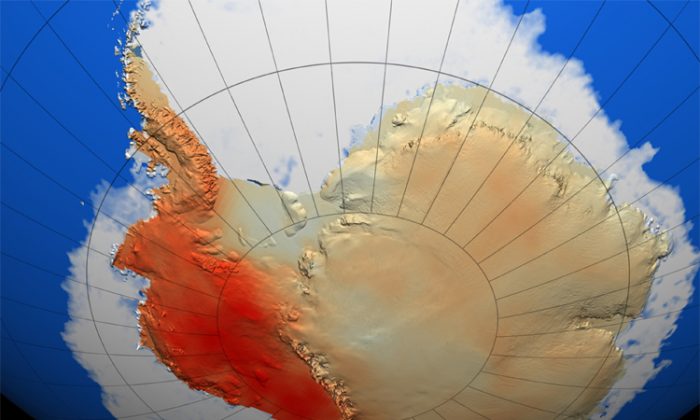 The West Antarctic Ice Sheet, pictured here is collapsing. Early predictions are for a 3 metre rise in sea-level.
Opinion

Just over a month ago I was sitting somewhat bewildered at my desk and rereading two research papers about the antarctic ice collapsing. I had known about sea level rise for many years now but this was big news; the enormous West Antarctic ice shelf was melting and breaking up on a slow slide into the ocean.

As it turns out glaciologist Terence Hughes had foreseen the disaster when he published “Is the West Antarctic Ice Sheet Disintegrating?” back in 1973 (Journal of Geophysical Research). Hughes, now retired, was ‘old school’ and worked on the ice. Because access to this frozen continent is so difficult it has been nearly impossible to collect enough data to test his prediction.

It was not until May this year that the results of two different research programs were published that the latest technology verified Hughes’ work some 41 years ago.The Antarctic Ice Sheet was collapsing!
Dr. Joughin, publishing in Science, used complex computer modeling to predict the collapse of the Thwaites Glacier. Thwaites is the “lynch pin” that holds the West Antarctic Ice Sheet in place. When it breaks up it will unleash as much as a three metre sea level rise. This will come on top of the one metre already predicted by the end of the century by global warming scientists.

The second paper published in Geophysical Research Letters is by Dr. Rignot’s team at NASA. They used satellites to measure ice thickness and movement . They found that since Hughes’ work in 1973, the ice discharge into the sea has increased 77%. Movement of the ice sheets which are more than 3000 metres thick increased by 33% between 2006 and 2013.

“These changes are related to climate warming,” Dr. Rignot said. “The collapse of this sector of West Antarctica appears to be unstoppable.”

Why is this happening?

Antarctica is more or less divided by an ancient mountain range. All the precipitation here is in the form of snow and the snow has been accumulating for millions of years. Its enormous weight causes the ice to flow away from the mountains (like toothpaste from a tube) toward the sea. These flows are called glaciers.

Because the bottom of this ice is below sea level and resting on bedrock it doesn’t flow very fast. Where it reaches the sea it sticks out into the water in gigantic sheets that break off into icebergs.

Recently, ocean currents have begun to change. Global warming is bringing higher temperatures to the water under the ice sheet and eating away at it support. Eventually, because of the undercutting, gigantic pieces of ice will begin toppling into the sea. Even now the ice is sliding into the sea faster than it has been accumulating over the last 7,000 years. And it’s because of global warming and nothing else.

We know that sea level has been rising during the World’s growing industrialization at about 1.7mm per year. During the next 70-80 years the sea is predicted to rise between 0.3 and 1.0 metres. But these calculations don’t take into account the Antarctic ice collapsing.

Ok, so that’s too far away to worry about. Right?

Not actually. Large parts of our land mass are only a little above sea level. What’s more is that they support millions of people and are agriculturally very productive. This is especially so in river delta areas that will be hit hard within the next few decades.

We should also consider coral reefs, now the most endangered ecosystem on the planet. Coral reefs occupy only 0.15% of the oceans and yet support about 25% of its species. We know almost nothing about reefs but believe that they have far reaching effects on the whole of the sea.

The collapse of these incredibly complex ecosystems will send not a ripple but a ‘tsunami of change’ through the oceans of the world and through Coral Triangle and Pacific Island communities where some 200 million people are sustained by tropical fisheries.

So what will all these people do when the ice melts?

UNESCO predicts that over 100-150 million people in S.E. Asia alone will be displaced through shoreline erosion, rising sea level, drought, and food shortages by 2050.

Unprecedented migrations of people are likely from rural areas to cities and from developing to more developed countries. It has been argued that environmental degradation in some countries will lead to political and military conflict as resources become scarce (Scott, et al. 2001). Even the simple case of oil reaching $100 a barrel coinciding with drought in 2007 pushed up the prices of grains and meats and caused food riots in 40 countries threatening governments as well as social stability in Africa, Asia, the Middle East, and Latin America and the Caribbean.