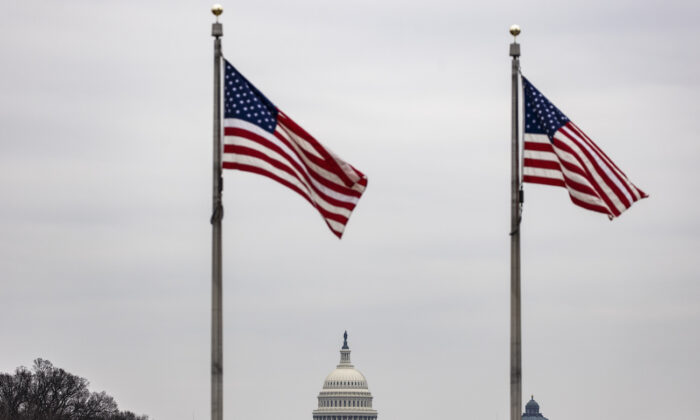 The U.S. Capitol building is seen past U.S. flags at the base of the Washington Monument on Feb. 15, 2021. (Samuel Corum/Getty Images)

Those who control our institutions and both parties, the commanding heights of the economy, politics, and culture, make up an elite class with shared values, beliefs, attitudes, and power. They dominate universities, media, education, Big Business, Big Sport, and Hollywood.

Some scholars such as Charles Murray, and political commentators such as Ben Shapiro and Tucker Carlson, have come to use the term “ruling class” or “new ruling class” to describe this pan-institutional and bipartisan elite. They define class as a matter of power and attitudes, differences in access to government and education, habits, and tastes. By contrast, Marxists saw the central divide as one between owners of capital and those who worked for them—capitalists and wage-workers or, in previous class societies, between slaves and slave-owners or feudal lords and serfs.

Angelo Codevilla, political philosopher, former senior intelligence official, and critic of the main schools of foreign policy, died in a traffic accident on Sept. 21, 2021. In addition to his books, articles, and speeches on statecraft and the foreign policy establishment, Codevilla provided an influential conservative analysis of the central class divide in the United States. He published a brilliant and prescient essay (later a book) in 2010 that laid out his view of the U.S. ruling class.

Codevilla emphasizes the power and attitude of the new ruling class—its conviction of its own moral and intellectual superiority and its utter contempt for the rest of society.

The ruling class, so understood, isn’t defined by its ownership of capital or wealth.

“What really distinguishes these privileged people demographically is that whether in government directly or as officers in companies, their careers and fortunes depend on government,” Codevilla wrote.

They vote Democrat and “draw their money and orientation from the same sources as the millions of teachers, consultants, and government employees in the middle ranks who aspire” to be members of the ruling class and identify with what they take to be the grievances of the oppressed.

Democrats are the party of the ruling class, Codevilla argues, and the Republicans are their junior partner. Writing in 2010, he sees the mass of voters as unrepresented and voiceless. Most Democrat voters see their party as representing them well, but that’s true of only a minority of Republican voters. There’s no party that represents and defends the views and values of the majority—patriotic, putting the United States first in global economic and political matters, avoiding unnecessary and unwinnable wars, with a foreign policy that strengthens our friends and weakens our adversaries rather than the reverse, and that’s consistently supportive of family, faith, and tradition.

“In short, the ruling class has a party, the Democrats. But some two-thirds of Americans—a few Democratic voters, most Republican voters, and all independents—lack a vehicle in electoral politics,” Codevilla wrote.

This divide and party difference persist in 2021, as reflected in the growing distrust of legacy media and other institutions. Only 6 percent of Republicans and 16 percent of all Americans trust TV news, according to a July Gallup poll. About one in five people trust newspapers. Relentless and gratuitous hostility toward President Donald Trump, contrasted with sycophantic coverage or the suppression of negative news about his successor in the White House (as in the Hunter Biden laptop scandal), no doubt accounts for much of this suspicion by Republicans and independents. Except for high bipartisan trust in the military and small businesses, the parties differ markedly on other institutions. Republicans have much more trust in the church and police.

The election of Trump in 2016 suggested the possibility of weakening the establishment Republicans and turning the party into one that puts the country’s national interests first (as other countries do) and is socially conservative.

Moving the party and country in a direction that reflects the views and values of most Americans, as expected, ran into fierce and unrelenting hostility within the administrative state, the media, the rest of the ruling class, and, not least, from establishment Republicans.

There are formidable obstacles to sustaining a third party in the U.S. system, so conservative Republicans focus today on maintaining the support of working people, not least that of black and Latino families. Part of the task is to hold off attempts of the globalist and socially liberal old guard to regain control of the party. If those attempts fail, some former party leaders and Never Trumpers aim to sabotage the Republican Party’s electoral efforts, supporting the Democrats or a third party in order to teach ordinary people a lesson.

The ruling class “grew and set itself apart from the rest of us by connection with ever bigger government, and above all by a certain attitude,” according to Codevilla.

“Whether formally in government, out of it, or halfway, America’s ruling class speaks the language and has the tastes, habits, and tools of bureaucrats,” he said. “It rules uneasily over the majority of Americans not oriented to government.”

In terms of education, cultural tastes, and disdain for ordinary people (the working class, who, in Obama’s memorable phrase, “cling to guns or religion”), the “educated” class is less diverse than ever. It aims to improve society, not by empowering ordinary people, but by managing them in their own best interests. This typically requires ever more centralized control of the state, with new or expanded programs and regulations.

The recent threat by Attorney General Merrick Garland to use the FBI against concerned parents who challenge school boards is just one of several examples of recent abuse of federal power in ways not envisaged by the original legislation and that seem to contravene the Constitution.

The Potter and the Clay

In short, the attitude of the ruling class to those outside it is essentially that of potter to clay. But the potter in this case disdains and despises the clay even as he seeks to shape and control it to conform to his own desires.

This attitude, seeking to limit democracy and to enhance instead the rule of experts and professionals, was common to the Progressives in the last century. As Woodrow Wilson, president of Princeton and then of the United States, put it, “I have often said that the use of a university is to make young gentlemen as unlike their fathers as possible.”

The current administration’s method illustrates this attitude. By using regulations and massive programs of increased debt and spending, the ruling class reserves for itself control over the economy and increasingly over more and more areas of everyday life.