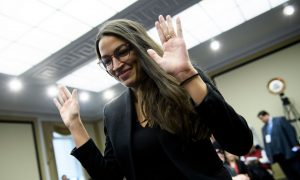 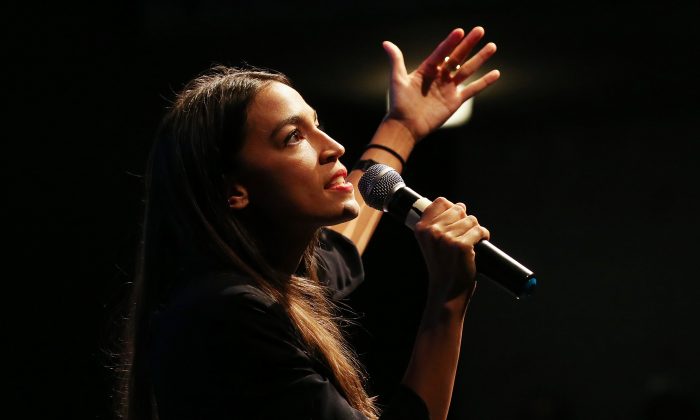 Then congressional candidate Alexandria Ocasio-Cortez (D-N.Y.) speaks at a progressive fundraiser on Aug. 2, 2018, in Los Angeles, California. She is the new face of democratic socialism. (Mario Tama/Getty Images)
Viewpoints

Last June, young political novice Alexandria Ocasio-Cortez upset 10-term U.S. Rep. Joe Crowley in the Democratic primary in New York’s 14th congressional district, and quickly zoomed to national prominence. Assured of election to Congress in her overwhelmingly Democratic district, she was guaranteed to receive tons of media coverage for being the youngest female member of Congress in history.

But her media-friendly persona has made her more than a passing trivia fact—she has become a bona fide political rock star.

Fresh-faced, bright-eyed, vivacious, earnest, refreshingly or maddeningly (depending on your perspective) outspoken, alternately sweet and mordant, and bursting with youthful idealism, she is a democratic socialist figurehead from central casting.

Although I disagree with her political agenda, there are several things I admire about Ocasio-Cortez.

Having been a socialist myself in my early 20s, I understand her desire to help others, particularly the poor. I commend her courage, being willing to work in the rough-and-tumble world of politics to achieve what she believes in; she aimed high and won. And I salute her candor. In a time when so many politicians seem wishy-washy, evasive, and unprincipled, Ocasio-Cortez, like Bernie Sanders, attracts people with the sincerity of her undisguised, unambiguous advocacy of democratic socialism.

Confronted by severe poverty when studying in South America at age 19, I felt compassion for the poor and desperately wanted to do something to help them. Consequently, in my youthful impatience, I jumped on board the socialist bandwagon. Like Ocasio-Cortez today, I favored radical public policies that I believed would greatly reduce, if not eliminate, poverty.

That was the easy part—caring. However, it takes more than good intentions to solve problems. The hard part is to figure out what actually works. My concern for the poor hasn’t waned, but my understanding of how best to help them changed.

Having lived in pre-Thatcher, heavily socialistic England, I saw the stagnation that socialist policies produce. I grew to understand that free markets, based on private property and supplied by profit-seeking businesses, have done and will do more to reduce poverty in the world than all government programs, NGOs, churches, and charities combined.

Obviously, Ocasio-Cortez has not yet outgrown her youthful infatuation with socialism, as I once did, and so we find ourselves on the opposite sides of the political divide. Thinking of the French proverb cited above, I could caricature her as a case of arrested development, whereas she could caricature me as a heartless sellout.

I am afraid that now she has gone all-in for socialism by staking her political career on calling for socialism, she will follow in the footsteps of that ultimate case of arrested development, Bernie Sanders. Sanders, you may recall, was less than competent at every job he had in the private sector, but then built a highly successful, profitable career for himself by going into politics and playing Santa Claus, nearly attaining the presidency with no talent other than telling voters that they had every right to have wealth taken from their fellow Americans.

Congresswoman Ocasio-Cortez has already been criticized by conservatives and libertarians, as well as by fellow Democrats. The former have called her out for such policy proposals as a Green New Deal, free health care for all, and 70 percent marginal tax rates on the rich. Indeed, those critics are correct—her proposals would be economically counterproductive and the dollar figures involved on both the revenue and expenditure sides don’t come close to adding up.

But the key point to understand here is that Ocasio-Cortez’s advocacy of mathematically obtuse or economically illiterate policies will enhance her popularity. (By the way, Ocasio-Cortez has an economics degree, which is more of an indictment of the state of higher education today than of her.) What she advocates works for her politically.

Indeed, she is a very shrewd and astute politician. The masses of people around the country who support her don’t care about economic truths or mathematical facts—they like what she’s saying.

Enthralled by the siren song of democratic socialism, millions of Americans believe, or want to believe, that government has magical powers to build a great society and to make reality conform to their vision. They believe that the only reason we still have poor people or unaffordable health care is because of a lack of will, and that all that is needed to fix these problems is to elect people like her to office. (Question: Where in the world has socialism ever ended poverty? If the problem were as simple as enacting the right laws, some socialist regime would have succeeded by now.)

For Ocasio-Cortez, it doesn’t matter that her policy proposals are riddled with fallacies and folly. What matters is that she is catering to people’s desires and capitalizing on voters’ ignorance and greed (greed being defined as coveting and scheming to get a hold of someone else’s property, which the left packages as “social justice”).

Some of Ocasio-Cortez’s fellow Democrats are upset with her because she is actively encouraging fellow democratic socialists to try to unseat relatively moderate Democrats currently in Congress. I think this is a winning strategy for her. As she told Anderson Cooper recently, “I would rather lose on my values than win on compromising who I am. Let’s say I’m only in Congress for two years. If we can radically change the conversation,” then, she would be satisfied. Her uncompromising attitude, her willingness to sacrifice her congressional career for the sake of the cause, will further endear her to her growing army of supporters.

Look, I’m only an economist, so I don’t have a crystal ball, but I’d bet that Ocasio-Cortez is here to stay. She showed herself to be both clever and disarming in her 60 Minutes interview. She is a willing street fighter on Twitter—a style that I personally don’t care for, but which President Donald Trump has shown can be effective.

If she chooses to run for reelection, she will be able to raise massive funds from around the country so easily that nobody is going to be able to unseat her. I wouldn’t be surprised to see her run for national office some day.