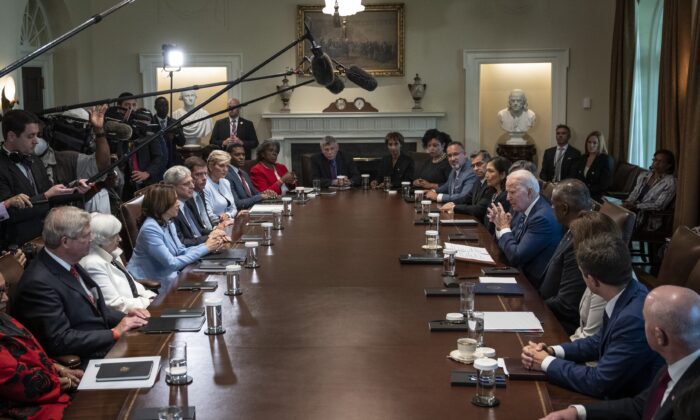 U.S. President Joe Biden speaks at the start of a Cabinet meeting in the Cabinet Room of the White House in Washington on July 20, 2021. (Drew Angerer/Getty Images)
Viewpoints

The Adults Aren’t in Control After All

Bidenomics leads to stagflation, and the receipts are in

On Nov. 23, 2020, Joe Biden announced key members of his cabinet. Democrat-supporting left-wing website PoliticusUSA characterized it this way: “The adults are back in charge, and the American people are about to be reminded of what it’s like to have a competent government working for them.”

That was a common refrain during the transition period and continued through June 2021, when Biden’s message to Vladimir Putin was paraphrased by CNN’s Chris Cillizza this way: “The Trump presidency was over—and that the adults were back in charge.”

Then there was NBC’s Jim Cramer boasting about the government-stimulated Biden economy in December 2021: “To me, we have the strongest economy perhaps I have ever seen.”

But the debacles continue to pile up on the “adults in charge”: the Afghanistan withdrawal fiasco, failure to deter Russia’s invasion of Ukraine, astronomically high gasoline prices directly resulting from cutting U.S. oil and gas production, massive supply chain problems, and soaring inflation.

The worst may be yet to come from the “adults in charge,” as the Commerce Department reported on April 28 that gross domestic product (GDP) had shrunk 1.4 percent in the first quarter of this year. This, after most analysts had predicted 1 percent growth. The Biden crew waited until the last days of the quarter to spring this bad news, which had to have been known and predicted much earlier!

Let us examine the Biden economic program to understand why it failed.

Rouse is a labor economist focused on the economics of education and equality. She was previously the dean of the Princeton School of Public and International Affairs and served as a member of former President Barack Obama’s Council of Economic Advisers.

Bernstein previously served as the chief economist to Biden in the first years of the Obama administration. He was also deputy chief economist for the Department of Labor under former President Bill Clinton’s labor secretary, Robert Reich.

Raimondo is the former governor of Rhode Island with a background in the finance industry, having co-founded her own venture capital firm, Point Judith Capital.

Yellen has a long career in academia and the federal government: professor emeritus of the Haas School of Business at the University of California (Berkeley), chairman of Bill Clinton’s Council of Economic Advisers during his second term, and chair of the Federal Reserve (nominated by Obama in 2014).

Tai is an attorney who clerked for U.S. District Courts in Washington and Maryland. She previously served in the U.S. Trade Representative’s Office of General Counsel during most of the Obama administration, and was chief trade counsel on the House Ways and Means Committee during the negotiation of the U.S.-Mexico-Canada agreement, focusing on its labor provisions.

Young has been in government service for over 20 years, having served as a staffer and then director for the House Committee on Appropriations before spending the last few years at the Office of Management and Budget as deputy director and now director.

All of these people are either academics or long-time federal government employees with very little experience in the private sector. They are all left-leaning and proponents of Keynesian economics and the primacy of the central government in stimulating the demand side of the economic equation. That said, none of their personal imprints can be found in the several gargantuan stimulus bills championed by the Biden administration.

Biden campaigned on grandiose claims to “build back better” (a phrase borrowed from globalists as described here).

That grand scheme translated into three primary stimulus bills targeted at Democrat political priorities: the $1.9 trillion American Rescue Plan Act (ARP), the $1.2 trillion Infrastructure Investment and Jobs Act, and the $3.5 trillion Build Back Better Bill (now reduced to “only” $2 trillion and Democrats hope that it can be passed by the Senate).

All of these bills represent the culmination of years of congressional staff work in collating Democrat priorities with the assistance of left-wing nonprofit organizations such as the Brookings Institution. For example, Green New Deal spending priorities are replete in the infrastructure bill.

The ARP was introduced on Biden’s official White House website with this interesting comment: “The CBO [Congressional Budget Office] forecasts that growth in gross domestic output will rebound in 2021, back up to 3.7 percent for the year.”

Note that this was the projection without the passage of the American Recovery Plan. By pushing the ARP Act and the Infrastructure Act, Biden’s crew disrupted that projection by superheating the economy through the end of 2021, igniting inflation along the way, and setting the table for the GDP collapse this past quarter.

Yet, here was the rosy forecast of the ARP Act, as stated on the White House website: “Leading Brookings Institution economists projected that, if the President’s plan is enacted, GDP would reach CBO’s pre-pandemic projection at the end of 2021, while CBO says we won’t reach potential GDP until 2025 without additional economic relief. As they conclude, ‘In all, with the $1.9 trillion package, we project that cumulative real GDP between 2020 and 2023 would end up close to its pre-pandemic projection.'”

The Democrats’ favorite Wall Street firm jumped on the bandwagon after ARP was signed into law in March 2021: “Goldman Sachs lifted its 2021 US growth forecast to 8% from 7.7%, citing new stimulus for the boost.”

As noted above, the Biden economic team relies heavily on the left-wing Brookings Institution for analysis and moral support from like-minded Keynesians. For example, a day before the Commerce Department released the devastating first quarter 2022 economic numbers, Yellen gave a speech at a Brookings’ event, which was called “Recession Remedies: Lessons Learned from the U.S. Economic Policy Response to COVID-19.”

Her speech was all about government interventions and stimuli while providing insight into the Biden administration’s political and economic priorities. Here she was on April 27, crediting that the American Rescue Plan enacted in early 2021 was “igniting a robust recovery.” Surely, she knew about the bad numbers that would be reported by the Commerce Department the very next day!

In that speech, she discussed the following economic priorities that infuse Bidenomics and Democrat stimulus bills:

These are the key priorities of the Biden economic plan (and Brookings)? No discussion of tax policies, growth incentives, energy self-sufficiency, the importance of ending lockdowns, supply chain management, anti-inflation efforts, private sector partnerships, or macroeconomics in general. The Democrats are all government all the time because government is the only solution they understand.

From the above discussion, it should be crystal clear that the adults are clearly in charge and America is in good hands, right?

The receipts are in on how that $3.1 trillion in Democrat-initiated government stimulus has worked out.

As reported by CNBC here, the first quarter 2022 economic numbers were devastating for Democrats expecting to be competitive in the midterm elections. GDP growth plummeted from an annualized 6.9 percent in the fourth quarter of 2021 to minus 1.4 percent this quarter, led by declines in fixed investment and defense spending. At the same time, the record trade deficit incurred resulted from falling exports (down nearly 6 percent) and rising imports (up nearly 17 percent). Meanwhile, inflation rose to 8 percent from 7.1 percent in the fourth quarter of 2021. The 2.7 percent rise in consumer expenditures was primarily due to the 7.8 percent increase in prices paid by consumers and not due a healthy and growing economy.

The bad numbers continued with the Consumer Price Index report released on May 11, as reported by USA Today: “April’s consumer price index report which found that the annual rate of inflation ticked down to 8.3% from 8.5% in March.” But that fell 0.2 percent short of economists’ prediction (yet another “miss” for the Biden economic team). Also, “the core [inflation] rate, excluding the volatile food and energy prices, rose 6.2% in the 12 months to April.”

And what does Cecilia Rouse have to say about inflation? In a May 9 CNN interview, Rouse was asked whether Sen. Joe Manchin (D-W.Va.) and former Treasury Secretary Larry Summers (under Clinton administration) were right about their comments that excessive government spending (the “stimulus” bills) was a principal cause of the high inflation rate.

Rouse responded that she was “not sure what the right is” and blamed the bad economy and inflation on Biden’s “effective” pandemic response. This is par for the course in the Biden administration: a political response to an economics question!

The Democrats continually tout their supposed competence in running the government. However, the economic chickens are coming home to roost for “Bidenomics.” The Biden economic plan of massive federal stimulus bills and an increase in taxes and regulations on businesses was a predictable recipe for the unfolding stagflation in the United States.

And other than a few short-term actions such as releasing oil from the Strategic Petroleum Reserve and reopening some federal lands to oil and gas leases, the main Democrat response remains attempting to push a scaled-down version of Biden’s Build Back Better social spending plan, the original version of which failed to pass the U.S. Senate last year.

Is this all that the “adults in charge” have to offer? Doing more of the same will only pour fuel on the stagflation dumpster fire that is well underway.