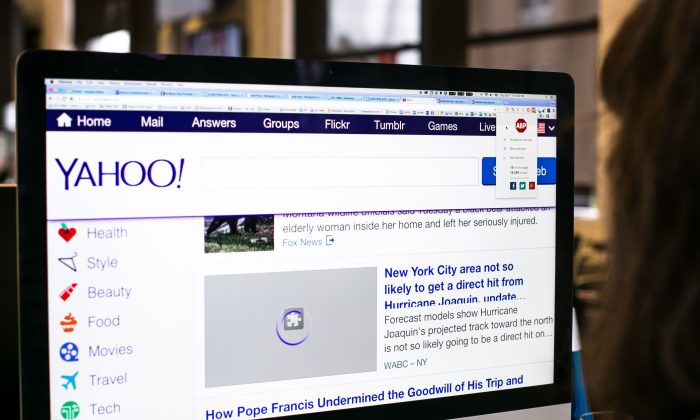 An Epoch Times staff members views the Yahoo home page with the Adblock Plus app installed on her computer in New York on OCt. 1, 2015. (Benjamin Chasteen/Epoch Times)
Business & Economy

In Internet years, ad blocking has been around since time immemorial. The Danish developer Henrik Aasted Sorensen created the first popular ad-blocking extension in 2002, and soon ad-free browsing had become de rigueur among Web geeks. By 2014, there were 144 million ad-block users around the world, which included a whopping 41 percent of the 18- to 29-year-old demographic, an Adobe report found.

But for digital publishers, the dent in their ad revenue was marginal.

Only a small fraction of readers used ad blockers, and desktop browsing was about to be overtaken by mobile, where ad blocking was available only on separate, niche browser apps that were rarely used.

A report released last month by the ad-block blocking service Sourcepoint found that only 0.1 percent of mobile ads were blocked in the United States, compared to 12 percent of desktop ads.

When the update came, ad-block extensions for Safari shot up straight to the top of the paid app charts, inspiring journalists to compare ad blocking to Napster, fraud, and even outright theft.

“I’m seriously thinking of robbing your store at the local mall,” Fortune Magazine’s Dan Primack wrote in an open letter to Apple. “Consider my pending pilfer to be the sincerest form of flattery.”

Apple’s embrace of ad blocking will hasten the adoption of ad-block blockers.

Apple’s embrace of ad blocking will hasten the adoption of ad-block blockers, according to industry experts. Counter ad blockers haven’t played a major role in online publishing until now because the sector itself is just emerging from the cradle.

“Some of the ad-block blocking companies are brand new,” said Eric Franchi, co-founder of the digital advertising firm Undertone. Sourcepoint, for instance, only launched in June.

“The natural adoption cycle is going to take a little time, but you’re starting to see experimentation by publishers,” said Franchi.

Ad-block blockers are already common among publishers in Europe, where ad blockers are more widely used than in the United States, but the practice is spreading. CBS.com started denying access to readers using Ad-block Plus in February 2014, and a week before the iOS 9 update, the Washington Post redirected readers using ad blocks to its subscription page.

Native advertising, where publishers host ads matching the format of regular content, has been floated as one antidote to the impending ad-pocalypse. Buzzfeed has been a pioneer in the craft, churning out listicles for its corporate clients that are indistinguishable from its regular content (save for a “promoted by” tag and a company logo).

But not every single website that survives on ad revenue is suitable for native advertising, and the over-reliance on the form can damage readers’ trust in the publisher. Although its sponsored content is clearly labeled, Buzzfeed’s strategy has already become a lightning rod for warnings about the creeping decay of ethics in the news industry.

Earlier in 2013, the Atlantic magazine was pummeled by its peers for publishing a lengthy sponsored post praising the leader of the Church of Scientology, which the publication later took down.

Native ads also aren’t completely immune to blocking. Publishers still have to label sponsored content as such, which opens the door for those ads to be filtered out, and the popular extension Ad-block Plus claims that it can block native ads too.

Rather than hoping for a technical panacea, Franchi is optimistic that a combination of persuasion on the side of publishers and a move toward less nettlesome ads will convince consumers to voluntarily view advertisement, but still on their own terms.

“I don’t think native advertising is necessarily the savior of advertising,” he said. “I think we’ll create a dialogue with consumers, study this, make recommendations, and come away with some understanding.”

Many ad-block users claim the high moral ground, arguing that as a rule, online ads are so intrusive and poorly designed that they impose an unacceptable cost on the user experience—and they have little trouble finding egregious examples of this.

Khoi Vinh, a former design director for the New York Times and someone who has been “neutral” on the ad-blocking debate, posted a video on his blog last week showing how a Salesforce ad made it impossible for him to scroll down and finish an article on, ironically, ad blocking.

However as the ad industry evolves, one thing is for certain: pressed at gunpoint, marketers and publishers will have to make ads more streamlined, take up less data, and more engaging—in short, better.

“It’s causing the industry to think about the composition of the ad and how it can be improved,” Franchi said.