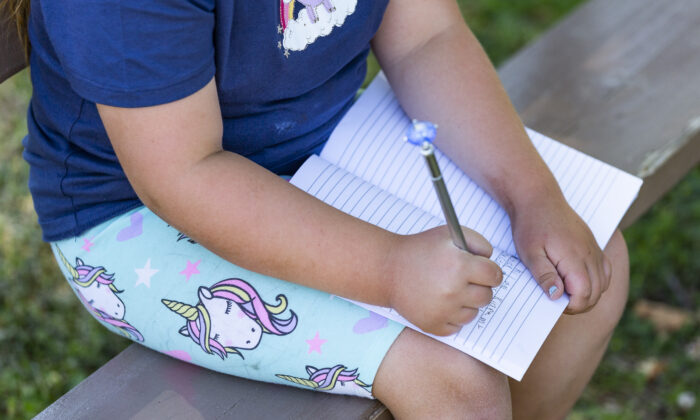 An elementary school pupil writes in her notebook in Brea, Calif. on May 24, 2021. (John Fredricks/The Epoch Times)
Viewpoints

The Abandoning of the Word Pupil

Wording is no doubt a small thing by comparison with the horror of a mass shooting such as the one of schoolchildren and teachers at Uvalde, but it’s nonetheless of some significance. In all the reports, I noticed that 8, 9, and 10-year-old children were referred to as “students.”

They were not students, they were pupils.

Does it matter what you call them, you might ask? If words matter, then it does matter (and Confucius thought so more than 2,500 years ago, for he wrote that when words were used wrongly, the state and society could not hold).

In fact, nobody believes that words don’t matter, least of all at the present time, when bitter disputes break out about nomenclature and by what pronouns people should be addressed. Such disputes are battles for power rather than for improvement or happiness. Since speech is so central to human existence, forcing people to change their language is an exercise in power over them, which isn’t to say that in no circumstances whatsoever should such changes be suggested or even mandated. It’s true that there are terms that are intrinsically degrading to those whom they designate, but with a few exceptions, struggles over language are not usually concerned with them.

To return to the question of student versus pupil: What does the almost total replacement of the second by the first signify?

A pupil is a child who is under the authority of a teacher who chooses for him what he should learn. This is because the child isn’t capable of choosing or deciding for himself: If the child were so capable, there probably wouldn’t be any need for teachers in the first place. When I look back on my own childhood, I think that if I had been left to choose for myself I should have spent my time playing. There may be a few children who, left entirely to themselves, would choose algebra, but in this respect, I was clearly of the majority.

A student is a young person old enough to be at least partly self-directed in the choice of what to learn, increasingly so as he progresses. Ah, you might say, at what point, then, does a pupil become a student? And if there’s no precise point, what’s wrong with calling an 8-year-old a student?

To ask for precise demarcations between being still a pupil and having emerged into studenthood is to ask for the dissolution of the very distinction. And this indeed is what’s happening.

I had a friend who used to teach severely handicapped children. A circular arrived one day from the authorities telling him that from now on he was to refer to those whom he taught as students. The children were 4 years old. And what were they students of? Such skills as doing up their shirt buttons, beyond which it was unlikely that they would ever progress very much. My friend subsequently became a successful art dealer.

What does the abandonment of the word pupil signify? In the first place, it’s unctuous and hypocritical, for in practice adults are still obliged to choose what it is that young children should learn, even if they have changed their opinions as to what it is that should be taught.

But there’s something deeper than this, a kind of insincere refusal of authority as such. People now refuse to admit that they are exercising authority even as they are doing so, because authority is supposedly so undemocratic or paternalist in nature. We’re all autonomous beings who have the right to decide everything for ourselves, and since there’s no precise age that autonomy can or should rightfully be exercised, it’s best at least to pretend that 8-year-olds are students and not pupils. By calling them the former rather than the latter, we are demonstrating our large-mindedness—except, of course, that it’s also idiotic and impossible for 8-year-olds to be considered students, so that we have to twist our minds and alter the meanings of words to call them such.

This denial of proper distinctions is a characteristic of our age. For example, the distinction between men and women, inscribed in biology, is increasingly being denied because (what is true) there are some marginal cases. Those who wish to eradicate distinctions, however, start by making the marginal central to all considerations. Failing to agree to this sleight of hand is characterized by the eradicators of distinctions as a sign of intolerance or worse, as if everyone who thought that the marginal should not be made central necessarily is in favor of ill treatment of the marginal, which, of course, is true neither empirically nor in logic. Moreover, few people recognize that the virtue of tolerance can be exercised only in the presence of disapproval or distaste, for unless there’s one or the other, there’s nothing to tolerate. Everyone, surely, tolerates what he likes or approves of. Nor is acceptance of something the same as celebrating it. For example, I accept rock music in the sense that I don’t wish to suppress it, but I don’t celebrate it and avoid it when I can.

No doubt there are some 8-year-olds somewhere who are capable of being students in the sense of choosing what and how to learn, but I think that they must be about as rare as giant pandas, if not rarer. By calling such young children students we’re suggesting that they have authority, and you can’t suggest such a thing without children taking you at your word and coming to think of themselves as authorities. This is abject.