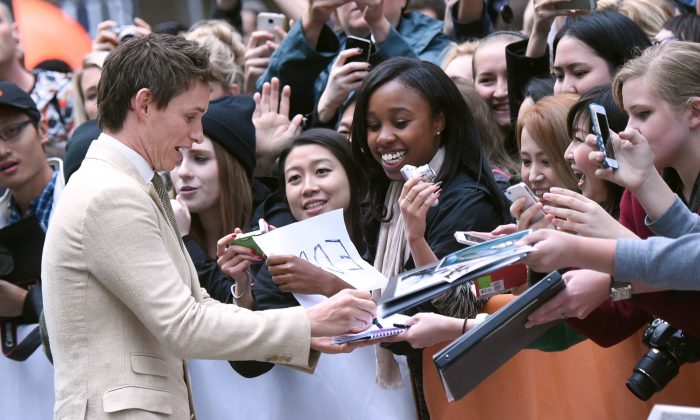 Eddie Redmayne signs autographs as he attends a premiere for "The Danish Girl" on day 3 of the Toronto International Film Festival at the Princess of Wales theatre on Saturday, Sept. 12, 2015, in Toronto. (Photo by Evan Agostini/Invision/AP)
Entertainment

The 7 Movies to See From the Toronto Film Festival

TORONTO — “What have you seen that you liked?”

It’s the most common question heard around the Toronto International Film Festival, and one that elicits endless variations of answers. Because of the festival’s size and scope, there’s no better place to get a full picture of the coming fall movie season, and often those films are ultimately headed for the Academy Awards.

This year’s festival, which draws to a close Sunday, has been, pleasingly, slightly less tethered to awards season predictions than usual. The 40th TIFF opened with a movie not out until next spring (Jake Gyllenhaal’s “Demolition”) and another (Michael Moore’s “Where to Invade Next”) that’s still up for sale.

In Moore’s film, he travels to Europe looking to bring home civic lessons to better the United States — an invasion to pillage something more valuable than oil, he says. A reporter coming back to the U.S. from Toronto isn’t so different, planting one’s flag on a handful of movies that stood out amid the festival frenzy.

The general takeaway has been that the coming season may be a little weaker this year, and that the Oscar field, for now, remains wide open.

From Johnny Depp’s Whitey Bulger (“Black Mass”) to Robert Redford’s Dan Rather (“Truth”), an especially large number of films this fall are sure to stoke the usual accuracy debates that surround dramatizations. But their power was especially clear in Toronto, where the most moving moments came when the real-life figures were in attendance, like those at the emotional premiere of the lesbian civil-rights drama “Freeheld.”

There are surely more, but here are seven must-see movies from Toronto:

Spotlight: The spirit of “All the President’s Men” was alive and well in Toronto, even if it was strongest in the journalism docudrama not starring Redford. No other film was more championed at TIFF than Thomas McCarthy’s engrossing procedural about the Boston Globe’s Pulitzer Prize-winning investigative reporting of the Catholic Church’s pedophilia scandal. Sure, journos like movies about themselves, especially when played by the likes of Mark Ruffalo and Michael Keaton. But “Spotlight” (Nov. 6) deserves the headlines.

Anomalisa: Charlie Kaufman’s first film in seven years is a stop-motion animation that arrived on the festival circuit without enormous buzz. The project started as a theater work and depended on a Kickstarter campaign just to get made. But its handmade artistry and beguiling melancholy are wondrous. A film that seemed destined to be a small obscurity became a festival hit and was acquired by Paramount Pictures.

The Martian: Hollywood doesn’t often combine “big” with “smart,” but Ridley Scott’s latest space adventure is an uncommonly intelligent spectacle. The gleefully nerdy film (due out Oct. 2), written by Drew Goddard from Andy Weir’s novel, is about an astronaut (Matt Damon) stranded on Mars. It’s a large, winning entertainment that’s something seldom seen through 3-D glasses: an ode to science.

45 Years: Charlotte Rampling and Tom Courtenay star as a married couple coming up on their 45th anniversary when a letter reawakens the past and subtly frays the lived-in peace of their old age. Even the most serene relationship can quake with doubt in Andrew Haigh’s masterful portrait of marriage.

Beasts of No Nation: Cary Fukunaga’s West Africa child soldier drama will get a lot of attention for being Netflix’s first original narrative release when it hits the service on Oct. 16. But the movie, starring Idris Elba and the young Abraham Attah, is as beautiful as it is horrifying.

The Danish Girl: The handsome meticulousness and overwhelming sense of “prestige” in the latest from director Tom Hooper (“The King’s Speech”) leaves some cold. But few would doubt that “The Danish Girl” (Nov. 27), starring Eddie Redmayne as gender-reassignment pioneer Lili Elbe and Alicia Vikander as her wife, is sure to be among the most discussed films this fall.

Heart of A Dog: Laurie Anderson’s film, dedicated to her late husband Lou Reed, is an art-house mediation of stirring intimacy. In a flowing and artful stream of consciousness, Anderson sifts through memories of her rat terrier, Lolabelle, the nature of language and NSA surveillance. It’s a hodgepodge of thoughts that aren’t much on their own, but the film adds up to something heartfelt and true about life and death.