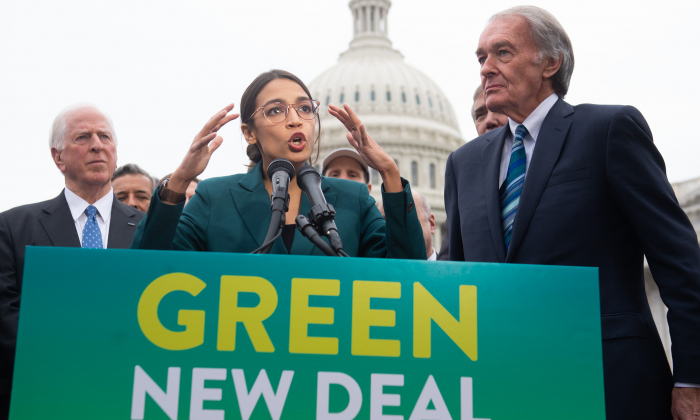 US Representative Alexandria Ocasio-Cortez, Democrat of New York, and US Senator Ed Markey (R), Democrat of Massachusetts, speak during a press conference to announce Green New Deal legislation to promote clean energy programs outside the US Capitol in Washington on Feb. 7, 2019. (Saul Loeb/AFP/Getty Images)
Politics

The 5 Most Bizarre Ideas in the Green New Deal

Days after President Donald Trump sounded the alarm about the encroachment of socialism on the American way of life, socialists in Congress unveiled their Green New Deal, a utopian wishlist of control-economy goals sure to make Karl Marx smile from his grave.

Socialist Rep. Alexandria Ocasio-Cortez (D-N.Y.), the main sponsor of the bill in the House of Representatives, said that to achieve the goals in the proposal, the United States would need to undergo a “World War 2 scale mobilization.”

The central goal of the plan is to achieve “a greenhouse gas neutral society” in 10 years, a call to action reminiscent of the Soviet Union’s disastrous five-year plans. Transitioning to 100 percent renewable energy sources would, by one assessment, cost the United States $13 trillion more than three times the entire annual government budget, using the fiscal spending figures for 2018. To pay for it, Ocasio-Cortez plans to ask the Fed to issue massive credit, which is socialist-speak for “print more money” and “charge more taxes.”

Implementing the gigantic plan would require a “large-scale transformation of society” which could lead to “some people slipping through the cracks.” To make sure that doesn’t happen, the deal proposes to first hand people a smorgasbord of guarantees for everyone, including starry-eyed socialist promises like jobs, vacations, retirement, education, health care, and food for all.

If the premise of the idea is not bizarre enough, the way the socialists plan to implement it has some seasoned observers laughing out loud.

1. Upgrade or Replace All Buildings

The Green New Deal calls for retrofitting all the buildings in the United States or replacing them. According to Statista, there are 136 million housing units in the United States. The deal calls for upgrading heating, air conditioning, and water systems, among other components of a building, to “achieve  maximum  energy  efficiency,  water  efficiency,  safety,  affordability,  comfort,  and  durability.”

2. Get Rid of All Cars and Airplanes

The Green New Deal calls for eliminating all greenhouse gas emissions from the transportation industry, a feat which would be impossible without removing all conventional combustion-engine cars and replacing air travel with high-speed rail.

In a document explaining exactly how that would be done, the bill’s supporters explain that the United States would have to “build charging stations everywhere, build out high-speed rail at a scale where air travel stops becoming necessary” and “create affordable public transit for all, with goal to replace every combustion-engine vehicle.”

3. Get Rid of Affordable Energy in Manufacturing and Agriculture

According to the Green New Deal, the United States must transition its industrial and agriculture sectors away from technologies that use oil and natural gas, two of the most affordable and efficient energy sources known to man. Fossil fuels are the lifeblood of American industry. The Green New Deal doesn’t offer ideas for how to move away from these fuels without crippling the U.S. economy.

The proposed Green New Deal resolution doesn’t mention what the United States would do with its 99 commercial nuclear reactors, which produce nearly 20 percent of the nation’s total electricity. But according to the “Green Deal FAQ” the socialists are calling to decommission all nuclear reactors in 10 years “if it is possible to get to fully 100% renewable in 10 years.”  Nuclear energy accounts for 60 percent of America’s emission-free electricity generation.

Underpinning the radical no-greenhouse-gas-emissions goal is a list of utopian socialist dreams, the most bizarre of which is a promise to hand money to people who are “unwilling to work.” As with other socialist ideas which don’t sound good in plain English, Ocasio-Cortez calls this free-money handout “economic security.” Beneath the veil of the pretty language, of course, is the fact that the money would be have to be taken from someone else, lest its value disappear, as has happened in socialist Venezuela.