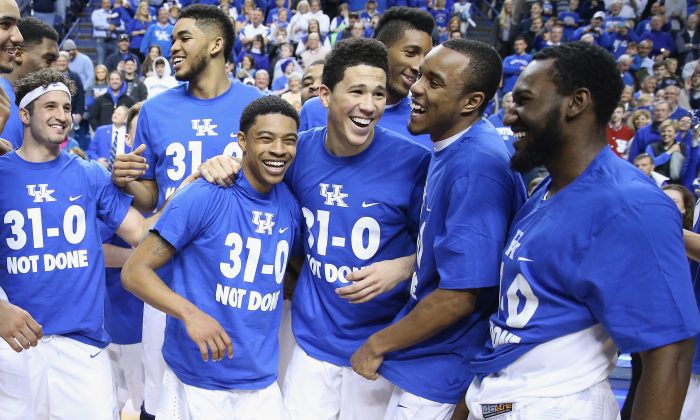 If only last year’s dominant Kentucky squad was around during this free-for-all college basketball season—a year in which no team has established themselves as a consensus No.1. The Wildcats would surely run the table to be 40–0 champions, with no team coming within single digits of beating them.

Instead, they’re in the running for greatest team to fall short of a title. Here are the five most dominant teams—that failed to cut down the nets—since the NCAA tournament expanded to 64 teams in 1985.

5. 1997–98 Kansas; 34–2 record: The Jayhawks were No. 1 in the nation from Dec. 3 through the final poll in March, but were shocked in the NCAA tournament 85–82 by eventual champion Arizona (featuring Mike Bibby and company) in the third round. Up to that point, Kansas—led by future NBA players Paul Pierce, Raef LaFrentz, Scot Pollard, and Jacque Vaughn—had just one loss, and it was via a buzzer-beater in a 2OT thriller at rival Missouri.

4. 2007–08 Memphis; 38–2 record: Only one man has reached the 38-win plateau in college basketball, and that’s John Calipari. He’s done it three times, though only one of those resulted in a national title. This was his first. The Tigers were led by future NBA MVP Derrick Rose, and until Kansas came back to stun them 75–68 in overtime of the NCAA championship game, their only loss had been a four-point defeat to second-ranked Tennessee.

3. 1998–99 Duke; 37–2 record: The Blue Devils had a front line consisting of future NBA stars Elton Brand and Shane Battier, while Corey Maggette, Trajan Langdon, and William Avery made for a dynamic backcourt. Duke’s only regular-season loss was a two-point, last-second loss to Cincinnati. Meanwhile, they beat fellow No.1 seed Michigan State twice, North Carolina three times, and were a perfect 19–0 in ACC play. Unfortunately for them, a Richard Hamilton-led UConn team upset them in the title game 77–74.

2. 1990–91 UNLV; 34–1 record: Defending national champion UNLV was No. 1 from the beginning of this season through the final AP poll in March. The team had future NBA players Larry Johnson, Stacey Augmon, Greg Anthony, and Anderson Hunt. The Runnin’ Rebels eclipsed the 100-point plateau 14 times, beat every conference opponent by double digits, and even threw in a win at second-ranked Arkansas for good measure. But when they reached the Final Four, a revenge-minded Duke—which UNLV had demolished 103–73 in the title game the year before—tripped them up 79–77.