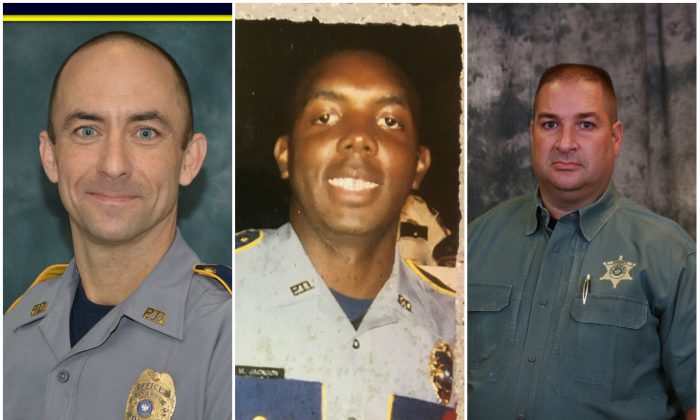 The 3 Police Officers Who Lost Their Lives in Baton Rouge

Just one more day and Brad Garafola would have been on vacation.

Just nine days earlier, Montrell Jackson was offering hugs and prayers to protesters on the streets of Baton Rouge, Louisiana.

Now they are gone. Killed by Gavin Long, a lone gunman in a shopping area on Airline Highway Sunday morning.

Sgt. Montrell Jackson, 32, had been with the Baton Rouge Police Department for 10 years, but the past days strained him, he wrote in a heartfelt Facebook post dated July 8.

“I swear to God I love this city but I wonder if this city loves me,” he wrote. “In uniform I get nasty hateful looks and out of uniform some consider me a threat. I’ve experienced so much in my short life and these last 3 days have tested me to the core.”

The city of Baton Rouge was host to daily protests after Alton Sterling was shot dead by police on July 5, followed by the police-involved shooting of Philando Castile the next day near Minneapolis.

Jackson sent prayers to people affected by the deaths—including the shooting of five police officers in Dallas on July 7—and asked people to resist hate.

“These are trying times. Please don’t let hate infect your heart,” he wrote. “This city MUST and WILL get better. I’m working in the streets so any protesters, officers, friends, family, or whoever, if you see me and need a hug or want to say a prayer. I got you.”

Nine days later he was gunned down, leaving behind a wife and 4-month-old son.

This is Montrell Jackson. One of the cops killed in #BatonRouge this morning. His 4mo old son is now w/o a dad. pic.twitter.com/r3CcLGD4Pi

Matthew Gerald, 41, was a strong character. “Whether it was the energy he carried with him or that Cajun accent he had … maybe it was the Marine in him,” Ryan D. Cabral, who served with Gerald in Iraq, told NOLA.com.

A 2nd victim of the Baton Rouge officer shootings has been identified as Matthew Gerald, a former marine #BRshooting pic.twitter.com/dTBgfZmWCH

Former marine and Black Hawk crew leader in the Army, Gerald knew well what it meant to serve his country. After leaving the military, he finished police academy last year and continued to serve as a Baton Rouge officer.

On Sunday, just 12 days after he started to patrol on his own, he was shot by Long, a man who had spoken favorably about the shooter who left five officers dead in Dallas 10 days ago.

Gerald left behind a wife and two children.

Brad Garafola, 45, deputy to the East Baton Rouge Parish Sheriff’s Office, was a jack of all trades who “loved staying outside and fixing things,” his wife Tonja Garafola told The Advocate.

“Everybody on this street depended on him,” she said.

Garafola had been with the sheriff’s office for 24 years, New York Daily News reported.

He was working extra duty at a B-Quick convenience store by the Airline Highway on Sunday. He was about to leave for a vacation when Long, wearing black clothes and a mask, killed him with an assault riffle.

Garafola left behind a wife and four children.

“These attacks are the work of cowards who speak for no one,” President Barack Obama said in reaction to the shootings. “They right no wrongs. They advance no causes. The officers in Baton Rouge; the officers in Dallas, they were our fellow Americans, part of our community, part of our country, with people who loved and needed them, and who need us now, all of us, to be at our best.”