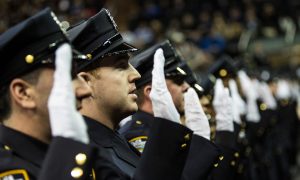 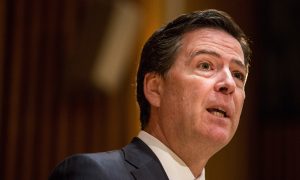 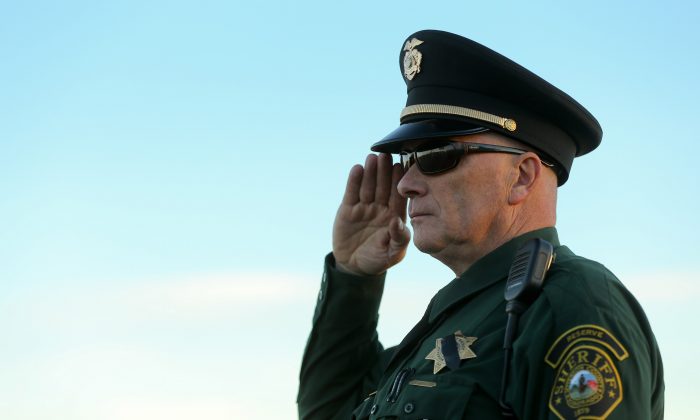 An officer salutes following funeral services for police officer Garrett Swasey at New Life Church in Colorado Springs, Colo., on Dec. 4, 2015. Swasey was killed in the line of duty on Nov. 27 when a gunman opened fire at a Planned Parenthood clinic. (Justin Edmonds/Getty Images)
Opinion

It has been a great honor for me to work with law enforcement officials throughout the United States on leadership, violence prevention, and crisis planning initiatives for the past 20 years.

These initiatives have included presentations and published works that stress collaboration between law enforcement, educators, community leaders, students, and parents.

Yet, my efforts for law enforcement have been much more than an honor, as they have provided experiences of profound inspiration.

The continual expression of patriotism exemplified by law enforcement officials reflected by the singing of “The Star-Spangled Banner,” the saying of the Pledge of Allegiance, reverent pausing to remember fallen officers, and prayers for military sacrifices at events as well as their countless charitable programs touches the heart of all who appreciate America. These expressions of patriotism and charity also keep the dignity of America pulsating in the hearts of communities across the nation.

The attempted assassination of Philadelphia Police Officer Jessie Hartnett on Jan. 7 reminds the nation of the mortal dangers our ethical sentinels encounter simply by wearing a police uniform.

This reprehensible ambush also brought to mind the senseless killings of NYPD Officers Rafael Ramos and Wenjian Liu. These officers were assassinated on Dec. 20, 2014, while sitting in their patrol car in Brooklyn.

Officer Hartnett survived, although being unexpectedly hit in the left arm three times at point blank range while sitting in his patrol car.

Despite his injuries, he courageously pursued the subject with his gun drawn in his right hand and fired, hitting the fleeing assailant, which allowed responding officers to make the apprehension.

This attempted murder of a police officer by a militant extremist is unfortunately not an anomaly.

The emerging threats of terrorist attacks against our police officers are only one source of danger.

On Oct. 23, 2014, a hatchet-swinging militant extremist hit a rookie NYPD cop in the back of the head, and wounded another cop in the arm, before the assailant was shot dead by two other officers.

Bratton also emphasized that this was a “new emerging threat” to law enforcement and provides a “contemporary view of what it is we are going to face in the weeks and months ahead.”

Just this week, the NYPD and FBI issued alerts based on increasing concerns of a resurfaced ISIS video advocating attacks that include targeting law enforcement.

Additional Dangers of Protecting and Serving

Yet, the emerging threats of terrorist attacks against our police officers are only one source of danger.

Aside from terrorist attacks, according to the National Law Enforcement Officers Memorial Fund (NLEOMF), there were 124 law enforcement officers who died protecting America’s communities in 2015, up from 119 the previous year.

Forty-two officers were shot to death, and fifty-two deaths were traffic related. Thirty others died of other causes, mostly heart attacks.

As memorialized in my article titled “Policing Dangers Demand Community Collaboration” for the Sept. 4, 2015, edition of the Epoch Times, I emphasized that, “The ongoing senseless killings of America’s ethical sentinels must engage our ethical compass and inspire unity among us to stop the madness.”

Each and every police officer killed in the line of duty wounds the heart of America, as they are the heartbeat of security and safety for communities across the nation.

The Police and The People: A Unity of Effort

Vigilance must be the order throughout each day, not only for our police but also for every community member privileged to call America their home.

We must honor the noble law enforcement profession, for without it, we would quickly decay into anarchy, chaos, and moral degradation.

In another article titled “Principles of American Policing,” authored previously for the Epoch Times, I argued that police–community unity is indispensable to American society.

The principles in this article are timeless, pivotal, and critical to reawakening the nation. The first principle stresses that “being pro-police and pro-community are inseparable, indefatigable, and pre-eminent.”

These are challenging times testing the moral fiber of America, and we must rise to the occasion with leadership, vigilance, and collaboration.

When each of us here have our heartbeats driven by an ethical compass focused on decency, patriotism, and respect, America will have the collaborative vigilance required to safeguard our homeland.