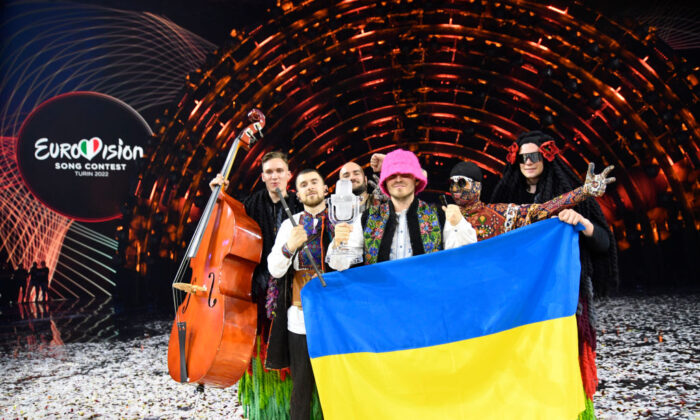 Kalush Orchestra of Ukraine are named the winners during the Grand Final show of the 66th Eurovision Song Contest at Pala Alpitour in Turin, Italy, on May 14, 2022. (Giorgio Perottino/Getty Images)
Viewpoints

The 2022 Eurovision Song Contest: A Reflection of an Age of Decadence

Everyone knows the song “Waterloo” by the pop band ABBA. The tune is captivating, and it is pleasant to listen to the melodious music. Most people would also have enjoyed the song in Mama Mia, the musical based on ABBA’s music. But few people would remember that ABBA, representing Sweden, won the Eurovision Song Contest in 1974 with their rendition of Waterloo.

The Eurovision Song Contest was held for the first time on May 24, 1956, when seven nations participated. It began as the brainchild of Marcel Bezençon who chaired the European Broadcasting Union (EBU).

The contest was an attempt to bring national broadcasters together in a pan-European effort to facilitate a wave of lasting peace between nations that had emerged from a devastating war in Europe—the Second World War.

The show was based on Italy’s San Remo Music Festival that began in 1951 but, considering the international character of the Eurovision Song Contest, some modifications were made and novelties added. The televised show was also used for the purpose of testing the limits of live television broadcast technology.

Australia has participated in it since 2015. Although Australia is a non-EBU member, it was invited to reward it for its commitment to broadcasting the event for over 30 years. Its participation rights are secured until at least 2023.

This brief foray into the history of the show brings us to this year’s competition, which was won by Kalush Orchestra, representing Ukraine, with their song “Stefania.” A song tribute to their mother. The song received a remarkably high score of 65.73 points. After the jury vote, Sam Ryder song’s, “Space Man,” representing the United Kingdom, had been leading the table by winning the jury vote, but the public vote was solidly behind the Ukrainian performers.

The contest has, however, strayed a long way from its earlier editions. Surely, it is still testing the limits of transnational live broadcasting, but the stroboscopic lights that blindingly illuminate the stage with its frolicking flashes make it difficult for anyone to enjoy the pop music.

Nowadays, the singers are usually accompanied by male and female dancers who gyrate on stage semi-naked and pretend to enjoy their dancing routines, while surrounding the lead singer. The singers, especially those representing a Western European country appear half-naked on stage, dressed in provocative outfits as if their nakedness will enhance their chances of winning.

Invariably, the songs are not euphonious, and the performances are often asinine, using vile and crass language. It is a mystery why producers would think of such performances as stylish emanations of the best pop music on offer in the lucrative music market.

In Australia, Eurovision is broadcast by the Special Broadcasting Service (SBS). SBS’s hosts for the event this year (as in previous years) were Joel Creasey and Myf Warhurst. Their contributions were in line with the decadence portrayed on stage. Using stilted language and making non-sensical comments, their hosting excelled in vulgarity.

In the first semi-final, televised in replay on May 13, Creasey was dressed in shorts with a neckless chemise. He gave the appearance as if he came from a soccer match where a brutal and efficient opponent decisively beat his team. Warhurst also was not much better dressed for the occasion. In between the acts, they interviewed the singers and dancers, and the conversation was shockingly insipid and meaningless. For the second semi-final, Creasey was dressed slightly better with a coat and tie, but the interviews remained pathetically absurd.

This year, Australia was represented by Sheldon Riley, who made the finals, but his ballad, “Not the Same,” failed to impress the voting public. He appeared on stage with a crystal mask, and he was dressed in an ill-fitting white garb.

Eurovision is supposed to be an apolitical music event. However, there was a feverish expectation, before and during the contest, that Ukraine would win it.

One wonders whether its highly-rated song benefited from an undeserved advantage due to the country’s fierce resistance to Putin’s invasion, or whether it was based on the inherent qualities of the song.

The competition has come a long way since its first edition in 1956 when the winner was Swiss singer Lys Assia with her song “Refrain.” At that contest, every country was allowed two songs because there were only seven countries that participated in the first event in Lugano, Switzerland.

But now, in its 66th year, the competition, held in Turin in Italy, accurately reflects the decadence, which has become endemic in the West and has eroded the civilisation, which contributed so much to stability and prosperity since the Second World War. Indeed, based on the performances of this year, it is fair to claim that the Eurovision Song Contest could hardly be regarded as a civilising influence that celebrates the modern world of pop music.

But vast numbers of people are still watching the show, waiting in vain for the contest to fulfil its promised role of serving an industry that promotes excellence in pop music.