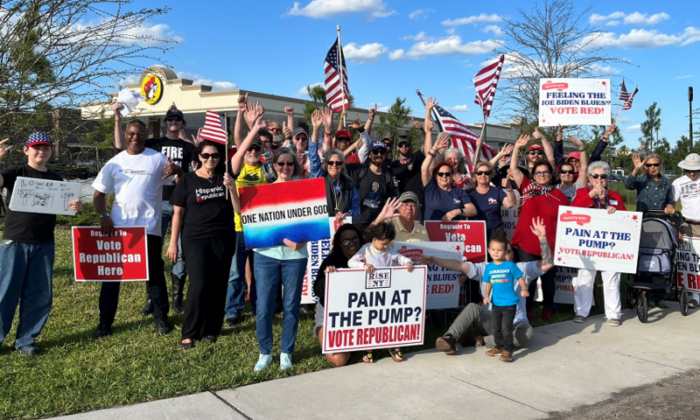 Scott Presler and his supporters pose for a photo during a voter registration drive at a gas station in St. John's County, Fla., on April 9, 2022. (Courtesy of Scott Presler)
2022 Midterm Elections

The 2022 Elections and the Republican Red Wave: ‘We’re Crushing It All Over the Country’

Capitalizing on the frustration felt by Americans over escalating fuel prices, a long-time Republican activist who recently launched a voter registration campaign at gas stations says “we’re crushing it all over the country.”

“It was kind of a joke at first,” Scott Presler told The Epoch Times, describing how people were posting the idea on social media that somebody should register voters at gas stations. “Of course, I’m the voter registration king so everyone was tagging me,” he said. “So, I thought, what the heck. Nobody else is going to do it so I will.”

Presler gained national recognition in 2019 and 2020 with his campaign to clean up the heaps of trash accumulating in mismanaged liberal-run cities. Now his nationwide effort to grow Republican voter registration is starting to gain some attention.

In case anyone was wondering, Presler noted, he initiated his gas station voter registration campaign two weeks before the Republican National Committee allegedly copied his idea. “I just want to fact check here and say Scott Presler was the first one to get this out there,” he said.

According to Presler, the effort is “very strategic.” First, his team locates gas stations that have access to public sidewalks, which provide them the right to be there. Second, they look for locations that have plenty of parking.

“We go out there with our clipboards and voter registration forms. We have our signs that say ‘Pain at the Pump, Vote Republican,’ or ‘Feeling the Joe Biden Blues, Vote Red,'” Presler explained, noting they also have signs that say “Register to Vote Here.”

“It’s important that people know we’re not just doing a protest,” he said. “There’s an action item behind it. ‘Stop here and register to vote.’ Literally, we have conversations with people at the gas station who are in close proximity to the sidewalk. But we can talk to the people at the pump without making the gas station’s people angry.

“It’s very important that when I am explaining about gas station voter registration that a critical component is that it’s public sidewalks. That way we will be undeterred in our efforts.”

In a social media post dated April 13, Presler noted how voter registration numbers in Pinellas County, Florida, showed Democrats have lost serious ground since August 2021. Where Democrats once had an advantage of 2,779 voters over the Republican Party, the GOP now has the advantage with 3,351 voters.

In an April 10 post, Presler boasted about Republican gains in North Carolina.

In an April 7 post, Presler noted that the number of registered Democrats in Pennsylvania had shrunk by a staggering 2,733 voters in only seven days.

“We’re crushing it all over the country,” Presler said. “If you saw the election results on [April 5], parents engaged at a level I don’t think we’ve seen since the 2010 Tea Party movement.”

In elections already taking place across the nation, Republican candidates do seem to be winning significantly more races than their Democratic counterparts. In Los Angeles, GOP legislative leader Connie Conway beat out two Democratic challengers and another Republican in the April 5 special election and secured enough votes to advance to a runoff to replace Republican Rep. Devin Nunes.

In the wake of the destruction caused by Black Lives Matter riots in 2020 and the subsequent national attention brought to Kenosha, Wisconsin, by the Kyle Rittenhouse trial, Samantha Kerkman claimed victory on April 5 to become not just the first woman to ever serve in the position of Kenosha’s County Executive but the first Republican to be elected to the spot since at least 1998.

Another success for conservative women in Wisconsin came on April 5 as Waukesha County Judge Maria Lazar defeated incumbent Judge Lori Kornblum—a liberal who used to work for the progressive Milwaukee County District Attorney John Chisholm—for a seat on the state Court of Appeals for District II.

In the “jungle” election for a seat in the Georgia House representing the state’s 45th district, Republican candidate Mitch Kaye won 42 percent of the vote while Democrat Dustin McCormick claimed 39.8 percent. A “jungle primary,” also known as a “blanket primary,” “open primary” or “top two primary,” is an election in which all candidates for elected office run in the same primary regardless of political party. The two candidates who receive the most votes advance to the next round. Kaye and McCormick will face each other in a May 3 runoff.

School board elections are where conservatives are scoring the most notable victories.

In an April 5 runoff election for the Menomonee Falls school board in Wisconsin, the self-described “Moms on a Mission” won three seats on the board. Nina Christensen, Shelley Holzman, and Chris Stueland succeeded in a contest where they had expressed concern about forced masking and about children being exposed to sexually explicit content in books provided to them without parental knowledge or consent.

In San Francisco, over 70 percent of voters backed the Feb. 15 recall of school board president Gabriela López and board members Faauuga Moliga and Alison Collins in response to their efforts to push their social justice agenda on students. Candidates backed by conservative groups like No Left Turn in Education and Moms for Liberty won in fiercely contested school board races in Missouri’s Rockwood and St. Charles school districts in an April 5 election. In Brookfield, Wisconsin, conservative Kathy Lim was elected to the Elmbrook School Board. In Lee’s Summit, Missouri, mothers Heather Eslick and Jennifer Foley won their school board races as well.

“This is painting a picture that the Republican, conservative base has fired up from coast to coast across the country,” Presler said. “We’re crushing it.”

Bolstering the idea that Republicans are gaining a serious advantage ahead of the 2022 primary elections is the unmistakable surge in Republican voter registrations across the country.

In Florida, Republicans have overcome Democrats on the voter rolls by a staggering difference of 101,076. More startling is the drop in the number of registered Democratic voters in the historically blue stronghold of Miami-Dade County.

In Hernando County, Florida, Republicans have traditionally held a majority over Democrats in voter registration. However, 2022 saw the number of registered Democrats (40,262) fall to third place—below Republicans (64,488) and “others” (41,595)—for the first time in its nearly 180-year history.

In Arizona, data recently released by the secretary of state’s office showed voters registering as Democrats in Graham County fell 1.1 percent between the November 2020 general election and April 2022. In Greenlee County, the decline was 2.1 percent. Conversely, voter registrations for Republicans and those choosing no party affiliation (NPA) increased. Statewide, there are now 1.5 million registered Republicans. More significantly, just as in Florida, Democrats in Arizona have taken the same third-place position—having fallen to 1.37 million registered voters (pdf)—behind voters with no party affiliation, who number 1.38 million.

“That just shows, that is a testament that the Democratic Party has become toxic, and I think people would even rather register as NPA than Democrat because they’re embarrassed to be a Democrat.”

To Presler, these numbers do not bode well for Democratic candidates in the Sunshine State, as Florida heads into the heart of the election season.

In the race for governor, Presler said, “Nicki Fried is just trying to amass as much money as she can” before being forced to bow out. “Charlie Crist is going to win the Democratic nomination, then he will lose resoundingly to [Gov. Ron] DeSantis who is a beloved figure here in Florida.”

“The main thing to look at in Florida are the school board elections in August,” he said. “Democrats could flip school boards to blue if enough Republicans do not get out and vote.”

In the battleground state of Pennsylvania, Presler said Democratic voters are switching their party affiliation to Republican at four times the rate that Republicans are becoming Democrats, another indication that Democrats have growing reason to be concerned as the 2022 primaries draw near.

While Long Island, New York, may be home to more Republican than Democratic voters, particularly in Suffolk, Presler said the result of his voter registration efforts in the “blue if not purple area” of Manhasset “was astounding” to say the least. “Everybody was feeling the pain at the pump,” Presler said, adding that his campaign there netted about 40 new Republican voters.

“There is an opportunity for the Republican Party to fight for the working-class American,” Presler offered. “If leadership is smart, they will say to every police officer, firefighter, nurse, doctor, teacher, airline pilot, flight attendant, construction, industrial and foodservice worker and, more importantly, to our military, ‘If you elect Republicans, we are going to put forth a protection act that prevents Americans from being fired, forced into retirement, or made to choose a different profession just because you refuse to submit to a government-mandated vaccine.'”

Recent reports show Democrats are losing support among voters under the age of 30. They have lost support among black and Hispanic voters. Democrats have even lost a 12-point edge among voters who once received child tax credit payments before efforts to extend the measure fell apart with the collapse of the Biden administration’s failed Build Back Better plan, handing Republicans a three-point advantage. A recent poll (pdf) showed 76 percent of Democratic staffers on Capitol Hill are convinced that Republicans will retake the House of Representatives in the 2022 midterms elections.

Asked how he feels about the forthcoming election season, Presler had but two words: “Game on.”