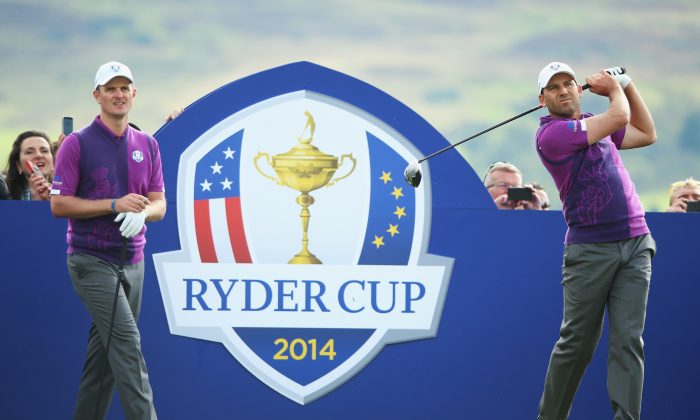 Sergio Garcia (R) of Europe tees off with Justin Rose during practice ahead of the 2014 Ryder Cup on the PGA Centenary course at the Gleneagles Hotel. (Andrew Redington/Getty Images)
Golf

For the 40th time the Ryder Cup Matches will be played—this weekend at Gleneagles Golf Club in Scotland. Just the second time the event is being hosted in Scotland—golf’s ancestral home.

Interestingly, the matches will be contested on the PGA Centenary Course—designed by American golf superstar Jack Nicklaus. The venue is far removed from the traditional links layouts used by the R&A when staging The Open Championship.

For the non-golf aficionado, the contest is different from the standard individual 72-hole stroke play events routinely played on the professional golf circuits.

The Ryder Cup is a team event, matching 12 players from the USA versus an equal number from Europe. Through 1981 the event was predominantly won by the American squad. With the inclusion of golfers from the entire European continent for the ’83, matches the results have switched noticeably. Team Europe has won 7 of the last 9 matches since 1995.

The venues alternate sites every two years—the last matches were played in 2012 at Medinah, just outside of Chicago. It was there the American team squandered a four-point lead going into the last day’s single matches resulting in an improbable European comeback. The turnaround by team Europe matched the same last day deficit that the American team had overcome in the ’99 matches played at The Country Club—just outside of Boston. The European win in 2012 was even more remarkable given the comeback happened on American soil.

Here’s what you need to know when viewing:

Instead of stroke play, the event features match play. What’s the difference?

Instead of a cumulative 72-hole stroke play tournament—the norm for most professional events played—the Ryder Cup Matches pits one or two men against one another through match play. Each hole is a separate match. The individual or side with the lowest score “wins” the hole and stands “one-up”. Scores do not carry over to the next hole—another match begins anew. When one match is “up” more holes than there is to play, that side earns one point for their overall team total.

How many total points are at stake?

Since Europe last won the event in 2012, they simply need to secure 14 points to retain the Cup. The American side will need to win 14 1/2 to bring it home.

How many players compete for each team?

Who are the respective “Captains” for each side and what do they do?

Eight-time major champion Tom Watson returns as Captain for the American side. Previously, Watson served as Captain for the ’93 matches—also played in Europe and the last time a USA squad won the matches on foreign soil. The European team is Captained by Irishman Paul McGinley. The Captains lead their respective squads and ultimately have final say on the players picked for the different matches and in what order they play.

The players compete in various formats. What are they?

The first two days—Friday and Saturday—the squads play two-man teams versus the other. The format is split with four teams playing in the AM and four teams playing in the PM. The respective Captains—Tom Watson for the USA and Paul McGinley for Europe—are free to choose whatever players they wish for the split sessions. Oftentimes, the Captains may seek to “hide” certain players who were not playing well and simply rely upon those on their squad with the hottest hand. On the final day, all 12 players compete in individual head-to-head matches.

The team matches for the first two day feature “foursomes” and “four-ball.” What does that mean?

Foursomes is played much more in Europe than in America. In foursomes, one two-man team will play alternate shots. For example, one man will hit off the tee on an odd-numbered hole and then alternate play till the ball is holed or conceded by the other side. On the next tee, the other player will tee off and the same procedure follows. With foursomes, the demand for solid play is self-evident. It is not uncommon for one player to drive the ball in a very difficult situation and for his partner to deal with the situation. It can be quite stressful when any team is struggling.

Four-ball is where all four players play the hole and the low score per team counts as its total. This format can be most exciting as teams attempt to have one player take a risky play in the hope of securing a lower score.

Clearly, the nature of foursomes and four-ball play requires adroit combination of individual players able to gel in the respective formats.

What happens if a given match is tied at the end of 18-holes? Are extra holes played to settle things?

No. Any match which is “even” or “all-square” at the end of 18-holes is final. Each team receives one-half point applied to its cumulative overall total.

How are the lineups determined by the Captains?

Each Captain submits the day prior his complete lineup in blind fashion. The envelopes are opened at the same time and the respective pairings are then announced.

Is there a strategy in placing players on the final day of singles play?

In many cases the team that is trailing going into the final day will attempt to front load its line-up with its best players to secure momentum. Waiting too long to have your best players play can result in the matches being finalized and thereby the positioning proves fruitless.

What advantages does the home squad have?

Besides the obvious in playing in front of partisan fans, the home squad has the responsibility and authority to prepare the host course as they see fit. Oftentimes a Captain will try to have the course preparation try to align itself to the talents of their players. Does it actually work? Hard to say but clearly each side believes it does when they host the matches.

What’s Scottish weather like at this time of year?

Rain is never out of the question when playing in the UK—especially in northern Scotland at the end of September. Temps will likely be just crossing over 60 degrees, but just barely. Expect temperatures to hover in the high 50’s. Rain squalls can occur throughout the day with wind velocities varying in intensity. Both teams will need to have quality rain gear for any eventuality—something that was missing when the USA’s rain gear failed during the matches played in Wales in 2010.

With Scotland serving as host for only the 2nd time, why were no links layout chosen, such as The Old Course at St. Andrews?

The Ryder Cup matches are a cash cow now—on both sides of the pond—and sites are determined by bidders with the deepest of pockets. Quality venues, whether they be links or otherwise, can be bypassed simply because the prospective host has the wherewithal to spend nearly limitless amounts to secure the event.