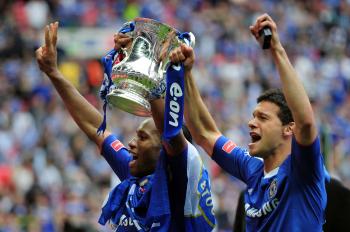 Chelsea Win FA Cup and Do the Double

LONDON—In this life you only get so many chances.

Portsmouth, relegated from the Premier League with the very future of the club in doubt given the mass exodus of players they are expected to face this summer, took on a rampant Chelsea in the FA Cup on Saturday.

The west London club, recently crowned champions of the Premiership after an astonishing glut of goals throughout the season including smashing eight past Wigan to secure the title, were seeking their first ever league and FA Cup double.

There could only be one outcome. Couldn’t there?

Not since perhaps 1988, when lowly Wimbledon met league champions Liverpool, had the odds been so stacked against one club in an FA Cup final. But all English football fans know the result of that game: Dave Beasant’s penalty save from Liverpool marksman John Aldridge secured a remarkable, legendary victory for the underdogs.

The 2010 FA Cup final at Wembley saw Chelsea rock the woodwork an amazing five times in the first half—an outstanding Didier Drogba free kick, an exhilarating Frank Lampard strike from outside the penalty area, a fine John Terry header, Drogba again from close range, and worst of all, Solomon Kalou with an open net in front of him.

And just when that faintest of thoughts crept in, “Could this be Portsmouth’s day?” the unthinkable happened.

Juliano Belletti brought down Aruna Dindane in the box, and it was a penalty for Pompey. This is what dreams are made of.

Up stepped Kevin-Prince Boateng, who will represent Ghana at the World Cup, to scuff it tamely toward the center of the goal, allowing Petr Cech to save it with his legs. Perhaps this was retribution for his horrific foul on Michael Ballack earlier, which knocked the German skipper out of the World Cup with ankle ligament damage.

Oddly enough, Ghana and Germany will be matched up on June 23 in South Africa.

An absolutely cracking free kick from Drogba was enough to clinch this famous first double for the out-and-out favorites.

Jostling to take Chelsea’s first two free kicks, he was finally allowed their third, the ball hammering against the bar after a fine save from David James. The fourth, Drogba made no mistake.

There was still drama yet to come, as Lampard missed a penalty to put the game out of reach, and the Algerian Belhadj, coming on as a substitute for Portsmouth, made some impressive contributions down the left flank—England beware.

It was Chelsea’s day. This double may go some way toward exorcising the ghost of Jose Mourinho even though they did lose out to his Inter team in Champions League.

But, in his time at Chelsea even the “special one” never won the Premier League and FA Cup double.