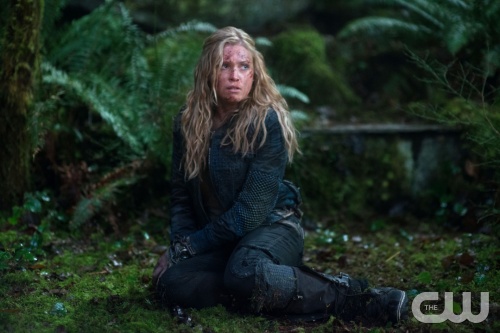 The 100 season 1 is unfortunately over but fans can look forward to season 2, as The CW gave the show a renewal early on due to its solid ratings and storyline.

The science fiction series has been a hit so far for the network, and looks like it could be one that goes multiple more season as well.

Season 1 ended with lots of action, including the following key points (see a full recap here).

—Bellamy and Finn could be dead or alive. Their fate is unclear after the battle with the Grounders. Raven appears to have died.

—The Grounders that were after The 100 are dead except for Anya. They were burnt by the remaining 100 through igniting rocket fuel.

—Clarke, Monty, and presumably the others with Clarke after the battle–including Jasper–were taken by the Mountain Men to a quarantine facility at Mount Weather

—Abby, Kane, and some others from the Ark safely landed on Earth. They see smoke in the distance that may be another part of the ship (The Ark broke into pieces as it hurtled towards Earth).

—Jaha stayed behind in the Ark due to necessity, because someone needed to do a manual override to launch the rest of the Ark to Earth. He appears likely to die because he only has a week of air, but might not.

Now, let’s see what has come out as far as spoilers for season 2.

—The perspective is going to widen with the grown-ups on the ground.

“We’re really beginning to widen the scope of the show and explain this world that these people from the Ark have been dropped into. So in Season 1, we lived in perspective almost exclusively, at least on the ground, of those 100 kids, and so we didn’t know anything. They’ve only been on the ground for something like 29 days by the finale, so we know as much as they do as an audience. Now they’re scattered and they’re in various parts of this world, and we begin to learn more about that world as they do. So that’s one of the things I think we’re going to lean into more — the sweeping adventure of it,” executive producer Jason Rothenberg told HuffPost.

—The pace of the story is going to slow down

“I think we told the story at a really, really rapid clip last season, which I think is an advantage for sure — it’s entertaining and the story doesn’t lag and it’s a sort of rip-roaring adventure. But some of that came, at times, I think, at the expense of real character exploration,” Rothenberg said. “And so I think we’ll probably want to slow down just a little bit, just enough to really mine who these people are and what they’re going through and how it’s changing them and things like that.”

—It’s not just going to be The 100, the adults, the Mountain Men, the Grounders, and the Reapers

“There’ll be others to introduce really quickly in Season 2, not to make things even more complicated,” Rothenberg said. “We will understand how those pieces all fit together and the ongoing conflict the 100 and now the population of the Ark have landed in the middle of. Those Grounders are warriors and they were that way long before the kids dropped down from the sky. We’ll understand the various sides of the conflict, what everybody wants. They’re all fighting for the survival of their own people from a very limited pot of resources. And so we’ll understand who’s allied and who’s sort of at war. The 100 will factor into that and so will the people from the Ark in Season 2.”

—Mount Weather is a government safe place, and the Chancellor on the Ark didn’t know about it

“His speech in the pilot says that nobody ever made it there, but obviously he was wrong. And I look at Mount Weather in Season 2 as almost a mirror or negative image of the Ark. Whereas the Ark was founded by scientists and astronauts, who were already in space at the time of the war, Mount Weather was founded by politicians and military people and powerful people who had connections and were able to get there in time. That may be a little spoiler-y, but we find that out pretty quickly in Episode 1 of Season 2.”

—The remaining 100 could be prisoners there

“A majority of the surviving members of the 100 have been taken–we think as prisoners, perhaps that’s the case, perhaps it’s not ,” Rothenberg said. Bellamy and Finn, if one or both are alive, could very well not be at Mount Weather. At the same time, different characters in Mount Weather–people who have lived there their whole lives–will be introduced.

—Mount Weather can be learned about by looking it up

“Whether or not they all appear in the second season is a question,” Rothenberg said. He also hinted that “not all of the others are dead,” adding “That’s a tine-in-next-year question.”

“Most of the ships -– we saw many of them exploding on the way down, some of them made it probably only to crash and burn, with others, maybe we’ll find some survivors. Part of the Season 2 storyline will be finding those survivors. What’s cool is it gives us [possible future stories]. In ‘Lost,’ they found the tail section in Season 3. Who knows when we could find other stations from the Ark on the ground? It could happen as early as the beginning of Season 2, it could be Season 4, if the good Lord is willing.”

“It’s definitely a season 2 issue and one we’re exploring now,” Rothenberg said. “It will be incredibly difficult, if it happens at all. He’s a man who’s made his peace and brought his people to the ground. He’s going to need some serious motivation if he’s going to make it. It’s going to be hard, that’s all I’ll say about it.”

As for a projected premiere date, we can look to Arrow, which airs on the same night.

The 100 started this time in midseason but is on the fall 2014 schedule (which is awesome), meaning that season 2 will start much faster.

Arrow has premiered on October 10 and October 9 so far, so look for The 100 to premiere in early October, perhaps October 8.

And there will be between 13 and 22 episodes in season 2.