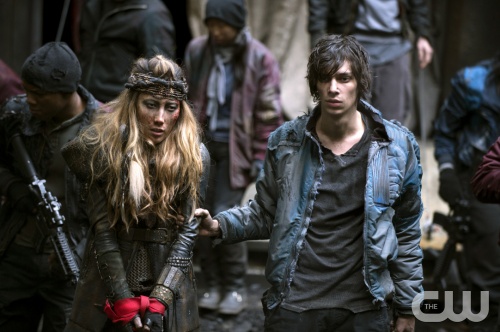 The 100 season 2 will start before too long, and new spoilers have come out.

The biggest one may be regarding Jasper. He had a crush on Octavia but she’s obviously gone, so he moves on.

He’s “crushing on a studious worker named Maya,” according to TVGuide.

In addition, Kane finds his authority position challenged over his questionable ability to maintain law and order as the adults who landed on Earth face an unceremonious welcome to the planet.

Back at Mount Weather, Octavia and the rest of The 100 there “discover there are some perks to their new home, including some of its original residents.”

Viewers can expect to learn more about both the Grounders and the Reapers, which will cast them in a new light.

“His speech in the pilot says that nobody ever made it there, but obviously he was wrong. And I look at Mount Weather in Season 2 as almost a mirror or negative image of the Ark. Whereas the Ark was founded by scientists and astronauts, who were already in space at the time of the war, Mount Weather was founded by politicians and military people and powerful people who had connections and were able to get there in time. That may be a little spoiler-y, but we find that out pretty quickly in Episode 1 of Season 2.”

The fates of Bellamy and Finn are still up in the air.

“A majority of the surviving members of the 100 have been taken–we think as prisoners, perhaps that’s the case, perhaps it’s not ,” Rothenberg said. “Bellamy and Finn, if one or both are alive, could very well not be at Mount Weather. At the same time, different characters in Mount Weather–people who have lived there their whole lives–will be introduced.”

The 100 season 2 is scheduled to premiere on Wednesday, October 22.