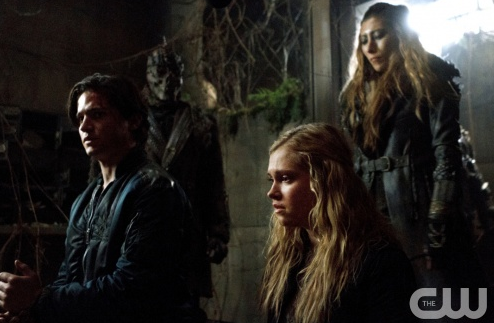 The 100 season 1 is nearing the end, and fans are wondering about what’s going to happen in the finale. Also, the good news is that the show has already been renewed for a season 2.

There have been multiple twists this season, the latest leaving the main characters on the Ark banded together while the action on Earth with the Grounders gets more intense.

The finale is actually starting in episode 12 on June 4, because the finale is two parts.

In “We Are the Grounders – Part 1” Clarke and Finn escape one dangerous situation only to find themselves faced with a new enemy, according to the official description. Meanwhile, Bellamy makes a heroic move to save Jasper, Raven faces a new danger, and Murphy finally gets his revenge. Also, those remaining on the Ark are coming to terms with the inevitable.

The description for part 2 (June 11) indicates that things on Earth get even more intense. Clarke pleads with Bellamy to do the right thing as conflict on the ground comes to a head. Bellamy forces Octavia to make a difficult decision. Raven and Jasper work against time and Finn makes a bold move. Meanwhile, the situation on the Ark comes to a stunning conclusion.

More insight into what will happen comes from executive producer and showrunner Jason Rothenberg.

While the first four episodes were about internal conflict (“Much more Lord of the Flies”), the grounder story is now being told much more intensely through the end of the season.

“We’re shooting the finale right now, and what we’re attempting in the finale is beyond — people think I’m crazy, literally. We’re shooting it as we speak. All these guys were up there, came in last night. I’m going up tonight. We’re in the woods doing the full-on Lord of the Rings, man. It’s crazy. It’s crazy! But I think we’re going to pull it off, so I’m excited to see where it goes.

“Then of course one of the things I want to continue as sort of the hallmark of the show is — like Lost — you just never know where we’re taking it. We twist it at the end of the pilot, we twist again at the end of three, we twist again, I think. Just when you feel like they’ve figured out who the grounders are and what that story is, they know nothing.”