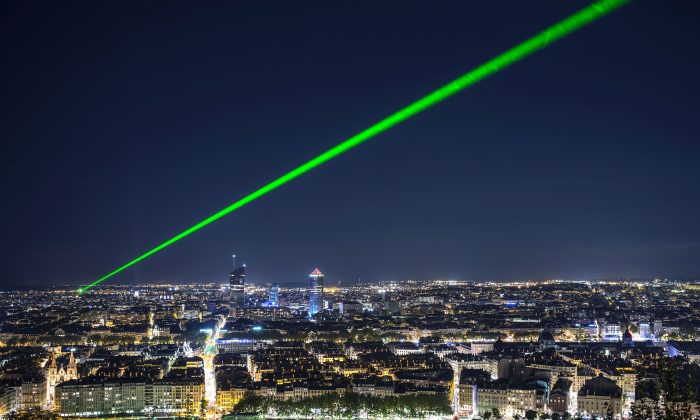 That Laser Pointer Could Be More Dangerous Than You Think

Lasers are rapidly getting cheaper, smaller, and better. CD, DVD, and BluRay players all brought lasers to use for our entertainment. In science, amazing laser imaging techniques were recognized with the Nobel Prize for Chemistry in 2014. In manufacturing, low-cost laser cutting machines are increasingly available in small companies, universities, and even schools.

But increasing ease of use can bring with it the danger of misuse, whether deliberate or accidental. Concern is growing over the safe use of small, battery-powered, hand-held lasers. For example, there are now thousands of incidents every year of aircraft pilots being targeted by lasers from the ground close to airports, with some suffering serious eye damage.

This wilful and illegal misuse highlights the potential for accidents too. Our eyes are highly developed to see in great detail and also in very low light, but these very qualities make them vulnerable to damage from light, too. Lasers are classified according to whether they present a danger to the eye, with classes 1 and 2 being safe in normal use, but how often do we check that a new media player has its correct “class 1 laser product” sticker?

At least the lasers in media players are enclosed. Laser pointers are designed to be free and to be seen. At low power, less than a thousandth of a watt or 1 milliwatt, laser pointers are useful and bright but still safe. Straying above that power, however, risks eye damage if the laser beam is shone into someone’s eyes.

Current laser technology can easily produce hundreds or even a thousand times the safe limit in a battery-powered hand-held device, which can be dangerous even at a large distance. For many consumers, there is not even an awareness of the scale of the danger.

We know to be careful close to a knife, and a gun is very clearly a threat even at a distance. A laser pointer may seem like a harmless toy, but with too much power it has the potential to do serious harm from afar.

Unfortunately, it’s difficult to be sure that your laser is low enough power and there are far too many incorrectly labeled lasers easily available at low prices. A study in the United States found 90 percent of green laser pointers tested did not comply with federal regulations.

I have measured many blue and green laser pointers from common online retailers sold as 1 milliwatt or less, but actually producing 20, 50, or even 100 times that safe limit. In fact, there is almost an incentive for small retailers in an online marketplace to provide too much power. Customer reviews are vital and there are many more customers who are likely to give bad feedback if the laser seems too dim than experts who both know the regulations and are able to measure laser power accurately.

Both the U.S. FDA and the EU are trying to remove hazardous lasers from the consumer field, but regulation and enforcement will need to be matched by a public willingness to understand the level of danger.

How to Use a Laser to Refrigerate Water

If high power lasers are as widespread as they seem, some may ask, why is there not already public outcry following a stream of laser injuries? Well, to harm your eye the laser needs to shine through the pupil, which highlights the most difficult part of raising awareness of laser safety. Your pupil is a very small area and so a beam shining around a room is very unlikely to hit exactly that spot. Most of the time nothing happens, but if it does, the result can be life changing.

For airline pilots, hazard comes even without permanent eye damage. A bright light entering the cockpit during take-off or landing can cause a distraction—and even a brief distraction during these crucial parts of a flight has the potential to cause serious consequences. In the United States the FAA provide guidance for airline pilots on laser hazards. Some safety specialists offer glasses which can block the most common laser colors, but this can also change how the cockpit controls look to the pilot.

As our lives become more and more surrounded by lasers—they even drive BMW’s latest car headlamps—we need seriously to understand them. In the mean time, if you want a laser pointer, make sure you get one that is properly certified (CE marked with a yellow and black label in the EU). It may cost more, but you will know it is safe.

William Wadsworth is a reader in the department of physics at the University of Bath in the U.K. This article was originally published on TheConversation.com