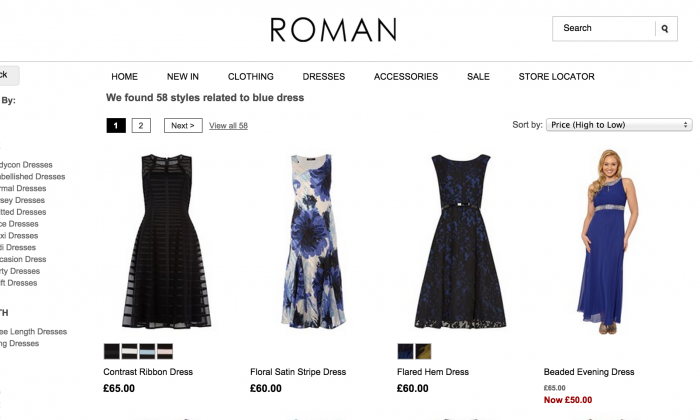 A screenshot of the Romans Originals website, which sells the dress in question.
Social Media

Roman Originals: Where Is that Tumblr Dress From? How Much Does it Cost?

The “blue and black or white and gold” dress being shared en masse on Twitter, Facebook, and Tumblr is from Roman Originals.

It comes in four colors, and it costs around $77.

@KDVR My opinion is that this is a crappy exposure of the black/cream option. No gold option exists: http://t.co/Xl3jIDXdD3 #sorryeveryone

A Tweet that is being shared offers an explanation:

“Your eyes have retinas, the things that let you interpret color. There’s rods, round things, and cones that stick out, which is what gives your eye a texture appearance in the colored part. The “cones” see color. The “rods” see shade, like black, white and grey. Cones only work when enough light passes through. So while I see the fabric as white, someone else may see it as blue because my cones aren’t responding to the dim lighting. My rods see it as a shade (white). There’s three cones, small, medium and large. They are blue sensitive, green sensitive, and red sensitive.

As for the black bit (which I see as gold), it’s called additive mixing. Blue, green and red are the main colors for additive mixing. This is where it gets really tricky. Subtractive mixing, such as with paint, means the more colors you add the murkier it gets until its black. ADDITIVE mixing, when you add the three colors the eyes see best, red, green and blue, (not to be confused with primary colors red, blue and yellow) it makes pure white.

—Blue and Black: In conclusion, your retina’s cones are more high functioning, and this results in your eyes doing subtractive mixing.

—White and Gold: our eyes don’t work well in dim light so our retinas rods see white, and this makes them less light sensitive, causing additive mixing, (that of green and red), to make gold.”