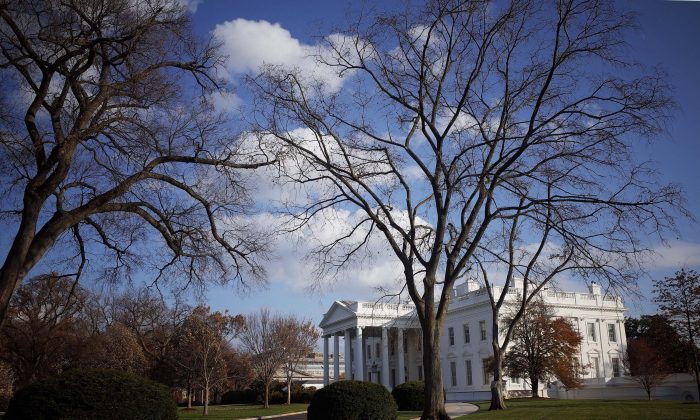 NEW YORK—Millions of Americans across the country are marking the holiday with lots of turkey, football, parades and early shopping, while many are overcoming some nasty weather and power outages. At the White House, President Barack Obama is spending a quiet Thanksgiving with a traditional meal.

Here’s a look at how Americans are celebrating:

Heavy security including bomb-sniffing dogs and police helicopters protected spectators of all ages who lined the route of the nationally televised Macy’s Thanksgiving Day Parade, which counted Thomas the Tank Engine, Paddington bear and the Red Mighty Morphin Power Ranger among its six new giant balloons.

Before the parade was over, snow flurries had replaced drizzle as thousands of people discovered they could get no closer than a long block away from the colorful spectacle. It was around 37 degrees with a hint of drizzle and light winds as clowns shot a burst of confetti from canisters to get the show rolling.

The honor of leading the parade went to the Pride of the Mountains Marching Band from Western Carolina University. Asked where that’s located, drummer Will Walker said with a chuckle: “It’s a dot on the map you will never hear from the rest of your life.”

The musicians from Cullowhee, North Carolina, hoped to set two records Thursday: one for most cymbal players (55) and one for largest band (505 members).

“How long’s your sentence behind bars?” he joked.

Smith, a clown for 12 years, loves to make children happy. “The kids, they are the ones who make the parade,” he said.

“I can’t go to the front. I can only see from here,” said Ivan Souza, of Florianopolis, Brazil, as he watched with his wife and two children.

Daryl Winchester, 17, of Queens, was luckier, snagging a front-row spot across the street from grandstands where the parade began.

“This is great. It’s nice to feel so festive for the holidays,” she said as she took pictures, waved and shouted encouragement to parade participants.

Shannon Hampton, a Lakeland, Florida, resident celebrating her 18th birthday with a friend, said the parade was exciting.

“My favorite part has to be the balloons because they are so much bigger in person than you think they would be,” she said.

A Little on Macy’s Parade History

The first Macy’s Thanksgiving Day parade featured animals from the Central Park Zoo. Back in 1924, the event was known as the Macy’s Christmas Parade. The giant balloons arrived on the scene in 1927. Felix the Cat was the first character balloon. In 1929, helium balloons were released over New York City after the parade. They were equipped with return address labels, and those who found one received a special gift.

How the First Family Is Celebrating

President Barack Obama is spending a quiet Thanksgiving at the White House, where the belly-stuffing menu featured all the holiday’s basics. He also continued a tradition of telephoning members of the armed forces to thank them for their service.

Obama says Thanksgiving is his favorite holiday “because, more than any other, it is uniquely American.”

In New York City, six men and a woman protesting a grand jury’s decision not to indict a white police officer in the shooting death of an unarmed black teenager in Ferguson, Missouri, were arrested after they tried to march toward the parade route, police said.

Near the end of the parade route, about 50 protesters walked down the sidewalk carrying signs and chanting, “Hands up, don’t shoot.”

“We will not tolerate, under any circumstances, any effort to disrupt this parade,” police Commissioner William Bratton said earlier Thursday. “This is a national event, a historic event. Anybody who would seek to interrupt it would be callous, indeed, on this very special day.”

Protests in New York have remained peaceful since the grand jury’s decision. The streets of Ferguson were calm with the arrival of the holiday, in contrast to sometimes violent protests that occurred earlier in the week.

Power outages from a major snowstorm forced some in the Northeast to celebrate Thanksgiving much like the pilgrims and Native Americans did almost 400 years ago — in the dark.

The outages were particularly bad in northern New England, where about 200,000 customers remained without power in New Hampshire on Thursday afternoon and about 80,000 were without electricity in Maine.

More than 35,000 New York utility customers were without power Thursday afternoon and about 15,000 customers lacked power in New Jersey.

In Putney, Vermont, Mike Mrowicki was in the middle of baking squash and making apple-cranberry crisp when his lights flickered off. Mrowicki said Thursday his family will improvise on its meal for 10 people.

“We’ve got a gas stove, and we’ve got a woodstove we heat with,” Mrowicki said. “We’ve got plenty of lanterns and candles.”

To the delight of some and consternation of others, it’s increasingly become commonplace to see stores open on Thanksgiving, as retailers try to entice shoppers inside and kick off the holiday shopping season a day earlier than the traditional Black Friday. Some of the stores open for at least part of the day on the holiday include Kmart, Target, Sears, Macy’s and Wal-Mart. Other stores, like Neiman-Marcus, Nordstrom and Costco, are closed.

At a Manhattan Kmart, Pamala Hill went for the 2-for-1 shoe special.

“Yes, that’s why I’m here,” Hill said. “They are fitting, and they are comfortable. I’m wearing them out of the store. We are going to pay for them up front. Because I gotta get boots. My feet are freezing. I’m from Florida.”