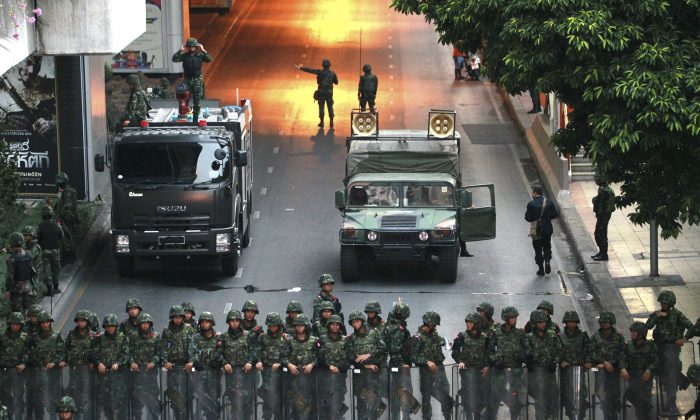 In this May 26, 2014 file photo, Thai soldiers secure a road near the Victory Monument in Bangkok, Thailand. (AP Photo/Wason Wanichakorn)
Asia & Pacific

BANGKOK—Thailand, once a poster child for democracy and freedom in turbulent Southeast Asia, has careened over the past two years from one image disaster to the next.

First a military coup. Then revelations of slaves in the seafood industry and other human trafficking horrors. In August, a deadly bomb struck central Bangkok. And now, the United States has declared Thailand’s aviation industry unsafe, striking at the heart of one of its biggest success stories, tourism. The cascade of bad news is striking even against the backdrop of a decade of political upheaval in Thailand.

Like the repeated scandals over Thailand’s role in human trafficking, the safety downgrade revealed years of official neglect and complicity. The stiff generals who seized power last year vowed to clean up a misruled Thailand. But as problems mount on the junta’s watch, their ability to rule effectively is increasingly in doubt.

“Thailand is used to having a great image in the world. Thai food, fun people, smiles and a fairytale monarchy,” said Michael Montesano, a Thailand expert at the Institute of Southeast Asian Studies in Singapore. “That image is fading and it’s not clear what the image will be in the future.”

After mass protests toppled a military government in 1992, Thailand for years after was touted as a beacon of progress in a region where authoritarian governments held sway. Its democratic credentials were shaken by a 2006 coup and the threat of military intervention that hung over subsequent elected governments.

During the 18 months the generals have been in charge since the 2014 coup, Thailand has changed in ways that might not be apparent at tourist sites or Bangkok’s trendy restaurants. A promise of quick elections has been put on hold. There is less freedom and more fear.

It has limited freedom of expression and assembly and curbed dissent by detaining hundreds of academics, politicians and journalists for what it calls “attitude adjustment,” which involves being held, sometimes for days, at a military base, interrogated and made to sign a contract not to criticize the junta.

Also troubling the country’s psyche is the poor health of its monarch, King Bhumibol Adulyadej, who celebrates his 88th birthday on Saturday. The world’s longest ruling monarch, often characterized as a key stabilizing figure in Thai politics, hasn’t been seen in public for weeks. His son and heir apparent, Crown Prince Vajiralongkorn, does not possess his stature or popularity.

Heavy criticism was directed at the junta and police for their handling of the deadly Aug. 17 blast in downtown Bangkok, which killed 20 and injured scores. Authorities insisted the blast was not an act of terrorism, a word it feared would scare off tourists. Their calculations might have paid off. Thailand says this year’s tourist arrivals will top 30 million and set a record as the numbers of visitors from newly prosperous China swells.

Yet this week, government, tourism and airline officials rushed into damage control after the Federal Aviation Administration said Thailand’s aviation industry does not meet international safety standards. The demotion to “Category 2” means Thai airlines cannot increase flights to the U.S. That ruling has no immediate practical effect because no Thai airlines currently fly to North America. Europe’s aviation regulator is expected to make a similar decision this month. Thai Airways, the financially ailing flag carrier, flies to 11 European cities.

“The economy is in bad shape, political divisions have not healed since the 2014 coup, morale nationally is very low and then we get this,” Montesano said about the aviation concerns. “Tourists who are headed to the beach might not care about Thailand’s chaotic politics or corruption, but something like aviation safety is another matter.”

Prime Minister Prayuth Chan-ocha, the former army chief who engineered the coup, usually bristles at criticism but this time acknowledged action was needed.

“We have to admit that Thailand’s aviation industry does not meet international standards,” Prayuth said. “We have to focus on fixing this.”

While the junta can’t be blamed for all of Thailand’s problems, it does seem at a loss to fix them.

“Problems pile up all the time for any government, but the nature of a military government to handle complex issues and challenges is limited,” said Thitinan Pongsudhirak, director of the Institute of Security and International Studies at Bangkok’s Chulalongkorn University.

High on the list of Thailand’s problems is human trafficking, long fueled by rampant corruption and complicity among police and other authorities, including the military.

In July, the U.S. State Department identified Thailand as one of the world’s worst hubs of human trafficking. It said it was keeping Thailand on its human trafficking blacklist for a second year due to persistent abuses that were largely ignored by the government and its predecessors.

The European Union is expected to decide this month whether Thailand’s human trafficking abuses are severe enough to trigger EU sanctions, which could mean significant financial losses for Thailand at a time when its economy is flagging.

Some of the abuses were documented by The Associated Press during an in-depth investigation that found slavery in the Thai fishing industry which supplies seafood to the U.S., Europe and Asia. The reports have resulted in the rescue of more than 2,000 trapped fishermen.

Intent on cleaning up Thailand’s image, the military government launched a crackdown this year on human trafficking. But critics say the changes, including dozens of arrests, are mostly for show.

Meanwhile, the junta is trying to protect its own image amid a growing scandal over the military’s alleged corruption in the financing of a public park on army property that cost 1 billion baht ($28 million). The case has been a public relations disaster for the junta, which said cleaning up corruption was one of its major reasons for seizing power.

“Thailand has always been behind international standards but the gap has widened with this government,” said Thitinan. “And solutions are in short supply.”