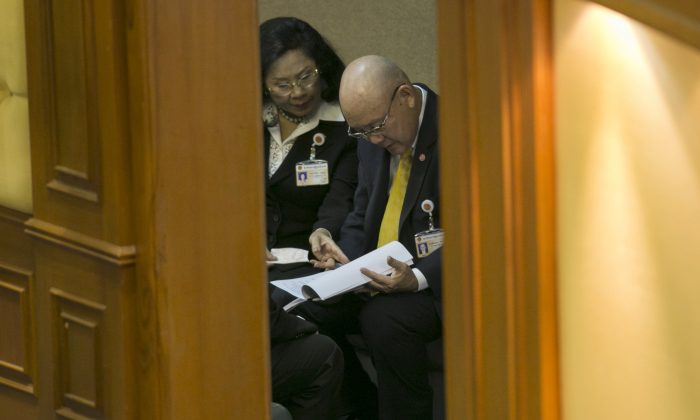 Thienchai Kiranan, right, president of Thailand's legislature, known as the National Reform Council, looks over notes before the start of the session before the body voted on the new draft constitution Sunday, Sept. 6, 2015, in Bangkok, Thailand. (AP Photo/Wason Wanichakorn)
Asia & Pacific

The junta-picked drafters had hoped the proposed charter would move the Southeast Asian country past almost a decade of political conflicts, but it was met with strong opposition on almost all sides of the political divide.

The legislature appointed by the junta, known as the National Reform Council, voted down the draft 135-105, with seven abstentions. The rejection, although welcomed by many, still sets back a tentative plan for Thailand’s transition to electoral democracy, with the military retaining substantial powers until a new constitution is drafted.

A new 21-member drafting committee will now be appointed with a mandate to write a new charter within 180 days. It also needs approval by the legislature and will be put to a referendum — meaning elections aren’t likely until at least 2017, according to analysts, if the new draft is approved.

The government had previously said elections could take place late next year.

“The army has been uncommitted from the beginning of the process, but it’s quite significant to have a rejection at this stage rather than a rejection at the referendum,” said Ambika Ahuja, an analyst for the Eurasia Group political risk firm.

“Now it’s become even more clear that the current regime prefers to drag on the status quo of direct military rule rather than risk going to the polls earlier, even with a constitution that would give the military a lot of power,” she said.

One of the most contentious provisions in the draft included a 23-member panel, including military members, that would be empowered to take over from the parliament and prime minister in times of “national crisis.”

Almost all parties criticized it, and the draft risked being voted down in a referendum that had been planned for early next year.

Any new charter under the junta appeared aimed at preventing a political comeback by former Prime Minister Thaksin Shinawatra, who was deposed in a 2006 coup after being accused of corruption and disrespect for the revered king. Thailand has remained divided since, with Thaksin’s supporters and opponents struggling for power at the ballot box and in the streets, sometimes violently.

The military abolished an earlier constitution after it deposed Thaksin’s sister, Yingluck Shinawatra, as prime minister last year, and the government operates under a temporary charter. The junta later picked the drafters and the 247-member National Reform Council to help write a new constitution.

“We might not be able to say that this is a true democracy as viewed in the Western world; it is transitional democracy,” Kamnoon Sidhisamarn, spokesman for the Constitution Drafting Committee, said before the vote Sunday.

He defended the draft as necessary to lessen the supremacy of a few political parties, saying that since Thailand became a democracy in 1932, “we found that we haven’t had any political stability.”

“There have been elections and coups during all these 83 years. In the past 10 years, we had two coups already. And two political parties came to power but they couldn’t solve problems,” he said.

The draft also envisioned an upper house that’s only partially elected — 123 out of 200 members would be appointed. A prime minister also could be appointed without having to win a parliamentary seat, as was the case in the past.

Supporters and opponents of Thaksin, as well as academics and activists, have criticized the draft, while the ruling military has stifled public debate on it.

Although the rejection of the draft delays a return to democracy, it is still better than a “meaningless election” that would take place if the draft had been approved, said Chaturon Chaiseng, an outspoken critic of the junta who had served in previous governments headed by Thaksin and Yingluck.