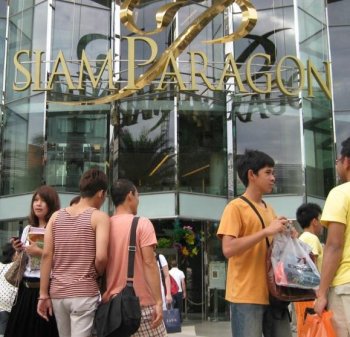 Shoppers at the Siam Paragon shopping mall on Monday, Aug. 16. The area was the site of the eight-week-long red shirt protest that ended on May 19 when the Thai military used force to break up the encampment that forced the closure of hotels and all shop. (James Burke/The Epoch Times)
Opinion

When exiting, the uniformed doorman snaps a salute, opens the door and I find myself on the street with my senses assaulted by the heat, pollution, traffic noise, and the sight of beggars, some with infants.

Turning left, I’m walking toward the busy Ratchaprasong intersection and more retail outlets where a small bomb exploded recently at a bus stop during local by-elections.

One person was killed and 10 wounded. It’s doubtful it would have deterred the shoppers for long, however, considering they were denied their favorite shopping area for eight weeks when it was taken over by red shirted anti-government protesters—especially when shopping, like eating, is considered a national pastime in Thailand.

So I’m still walking on the sidewalk in an area that was once in the red zone—the 1.2 square-mile area occupied by the red shirts during much of April and May in their failed bid to force the country’s Prime Minister Abhisit Vejjajiva to dissolve Parliament and call an early election.

Like most Thais, the protesters inhabiting the camp were largely friendly and hospitable to both inquisitive visitors and the international press, while somewhere unseen in the shadows was the more militant wing of the movement.

Sleeping on mats on the concrete pavement, the protesters were generally described as being either rural poor or migrant workers supportive of exiled former Prime Minister Thaksin Shinawatra, a man that the Thai government now describes as a terrorist.

To get to the intersection I pass the Buddhist temple that was meant to be a sanctuary for protesters on May 19 when the camp fell to the military. I was present that day, as a reporter.

I had stopped at the temple gates and looked in and saw mainly frightened people. I had to move on to meet my deadlines. Several hours later six of those people, including a Red Cross nursing volunteer were shot dead.

Like the recent bombing at the Ratchaprasong intersection, no one has taken responsibility for these shootings. In total, the number of deaths during the April-May protests was 91, most of those were protesters shot by the military.

At the Ratchaprasong intersection, where the red shirt leadership had their stage, it’s now hectic again with seven lanes of traffic, retailers with open doors, and on one corner, locals making offerings at a shrine.

In the late afternoon on the day the red shirt camp fell, this area was covered in a smoky haze and it was eerily quiet, the only sound was the slow rumbling of Southeast Asia's second largest shopping mall going up in flames. Now tourists take photos of its burnt out shell. It was one of over 30 buildings in Bangkok that the protesters set alight on May 19.

In a bid to hide the mall’s twisted remains netting has now been hung up on all sides and a huge 60-foot-high billboard has a rather optimistic message about how the rebuilding of the shopping landmark will contribute to the peace and prosperity of Thailand.

Nearby a line of taxis waits for fares, some perhaps with their radios tuned to the news, listening to updates on how the government is considering winding back the state of emergency—at least in some provincial areas.

The Thai capital will be under its power for sometime yet, restricting the media, limiting gatherings, and giving the authorities the right to detain without charge—all mostly affecting the red shirts and barely noticeable to the Bangkok shoppers.