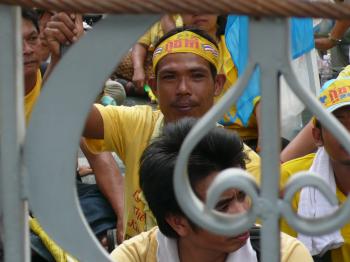 An anti-government protester sits inside the locked gates of Thailand's Government House. (The Epoch Times)
International

By Epoch Times Staff
Print
BANGKOK—Tensions have turned up a notch in Thailand's political crisis that is threatening to bring down the government.  As of 5:00 p.m. August 28, Thailand time, police were lined outside the rear gates of Government House, Thailand’s White House, which protesters have occupied for the past two days.

The People's Alliance for Democracy (PAD), the group leading the protest, has issued Prime Minister Samak Sundaravej a deadline of Sunday Aug. 31 to step down.

On Wednesday, arrest warrants were issued for nine top members of the PAD on four charges including treason. The Civil Court also issued an injunction, filed by the Prime Minister’s Office, ordering protesters to vacate Government House, which the PAD is appealing. While that challenge is in the courts so are orders that would set up the apparatus to give the police the go ahead to disperse the crowd with violence.

Nonetheless, the PM’s current stance is that he will not seek to disband the rally by use of force.

PAD leaders have also repeatedly promised not to use violence. Sondhi Limthongkul, one of the core leaders, said he wouldn’t use rally members as a shield to avoid arrest

Earlier in the day, the police had been barely visible at the barricaded entrance to the protester-occupied zone of the government district. The reported 2,000 strong force literally sat a block away, reading the newspaper or napping in the over ninety degree heat. Their riot gear was leaned against fences or stacked in the backs of open trucks, hardly giving the impression of being ready to snap into action..

Protest organizers locked themselves in by chaining closed the gates to the government house—with thousands of protesters inside and thousands more camped throughout the government district outside – to keep the police at bay.

A group of 30 Thai senators gave their tacit support for the PAD by questioning the charge of treason against PAD leaders as too harsh.

"Protesters do not have sufficient arms and strength to change the administrative regime and overthrow democracy," said Senator Tuang Anthachai according to The Nation newspaper.

Ten senators also visited the protest site as a gesture of support expressing their wish for the rally to remain nonviolent.

As the police are now making their presence felt, leaders are telling protesters not to be frightened and to turn on their cameras and videos to capture whatever the police may do.  Among the protesters are many women, children, monks and nuns.

The PAD supporters, who have been arriving from all over Thailand, are prepared for the long haul. They have come with suitcases, tents and washing supplies, turning the historic government district into a shanty town awash in yellow paraphernalia, the hallmark color of the PAD.

Every interview with protesters took a similar tone. Sangjan Luangprabang, a 49-year-old food seller, arrived Tuesday morning with five bus loads of PAD supporters from Maesot, some 675 km away from the capital.

When asked how long she plans to stay, Sangjan replied, “I’m not going back until the government goes… We don’t have a car to go back.”

The anti-government group is calling for the resignation of Prime Minister Samak Sundaravej, whom they call an illegitimate proxy of former Prime Minister Thaksin Shinawatra.  Shinawatra was ousted in a coup two years ago amidst charges of mass corruption. At that time, PAD had lead months of protests against Shinawatra which the military finished off by staging the coup.

Three days after the coup, Thai King Bhumibol Adulyadej named General Sonthi Boonyaratglin head of a caretaker government which ruled for 15 months until elections last December.  Sundaravej won that election with a party built from the ruins of deposed Shinawatra’s Thai-Rak-Thai Party.  However, the election was fraught with charges of vote-buying and corruption and is accused of being bankrolled by Shinawatra.

To the question of what comes next after the government falls, the reply is a little more vague.
“I don’t care who rules, anyone but this group. I just want this government gone,” said Sangjan.

Because of charges of rampant corruption in Thailand’s fragile democracy, the PAD is calling for constitutional reform which would allow for 70 percent of parliamentary seats to be appointed.