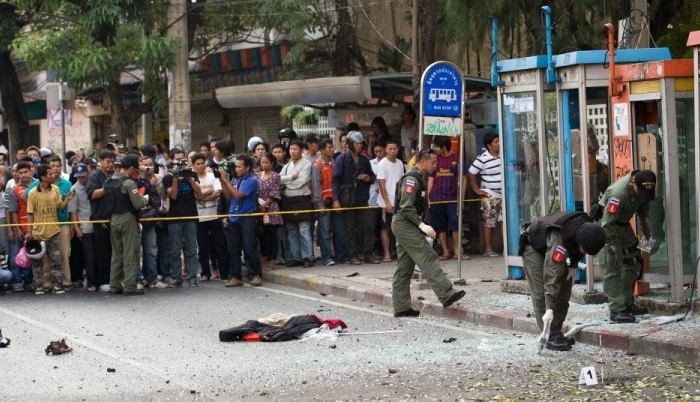 Thai police said Thursday that the Iranians detained following a series of bomb blasts in Bangkok were conspiring to target Israeli diplomats in the country, say media reports.

Authorities linked the Iranian suspects, including one who lost his legs in bomb blast, to attacks on Israeli embassy workers in Georgia and India on Monday, reported the BBC.

According to the Bangkok Post, the injured man is said to have been in stable condition in a nearby hospital. He attempted to throw a bomb at police while attempting to escape but the device bounced off a tree and hit him before detonating.

“Their targets were individuals, Israeli diplomats, not the Thai people,” Thai police chief Priewpan Damapong said, referring to the Iranian men who are in custody, reported the BBC. In all, there are four suspects in the incident, all confirmed as Iranian. Two, including one woman, have fled the country.

Thai Deputy Police Chief Pansiri Prapawat said authorities are on the lookout for a fifth suspect, who was described by the Post as “a man of middle-eastern appearance.”

Israel has accused Iran and its Lebanese ally, Hezbollah, of orchestrating the attack on a diplomat’s car in India on Monday and another bomb attempt in Georgia. Iran has denied the allegations. The Israeli diplomat in India was injured and the car was destroyed.