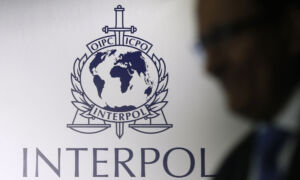 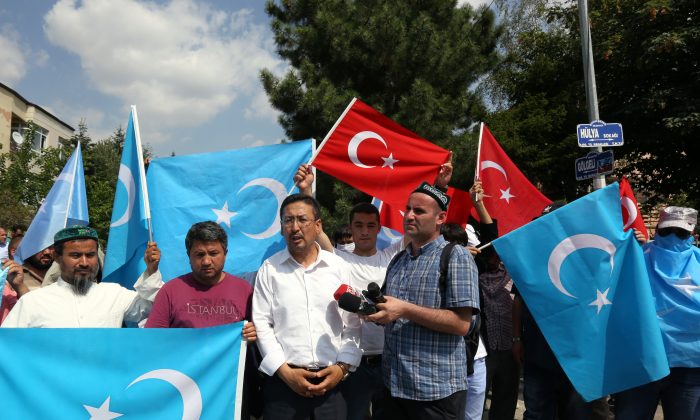 Uighurs demonstrate before the riot police used pepper spray to push back a group of Uighur protesters who tried to break through a barricade outside the Chinese Embassy in Ankara, Turkey, Thursday, June 9. 2015. (AP Photo/Burhan Ozbilici)
Asia & Pacific

Thailand Condemned for Repatriation of 109 Uyghurs to China

BANGKOK—Thailand faced a blizzard of international criticism Thursday, and its consulate in Istanbul, Turkey, was ransacked, after it deported 109 ethnic Uyghur refugees to China despite fears that they would face persecution there.

The U.N. refugee agency called Thailand’s action “a flagrant violation of international law.” The United States also condemned the deportations, and voiced deep concern about protection of asylum-seekers in Thailand. Amnesty International said that the Muslim Uyghurs could face detention or torture in China.

Protesters in Turkey, which has cultural ties to the Uyghurs and accepted an earlier group of Uyghur refugees from Thailand, ransacked the Thai Consulate in Istanbul overnight. Police in the capital, Ankara, used pepper spray to push back Uyghur protesters who tried to break through a barricade outside the Chinese Embassy.

Turkey’s Foreign Ministry condemned Thailand, saying the deportation came despite “numerous initiatives” by Turkey to prevent the Uyghurs’ repatriation. The office of the U.N. High Commissioner for Refugees said it was “shocked,” having been given assurances by Thailand that the group would continue to receive protection.

Thai deputy government spokesman Maj. Gen. Verachon Sukhonthapatipak said Thailand had assurances from Chinese authorities about the safety of the Uyghurs. However, in Beijing, Foreign Ministry spokeswoman Hua Chunying said China would take action against those suspected of breaking the law.

Thai Prime Minister Prayuth Chan-ocha said that as a third country, the matter was not Thailand’s problem, and that the place they were sent to—he did not name China—would take care of it according to its justice system.

“I’m asking if we don’t do it this way, then how would we do it?” he said. “Or do you want us to keep them for ages until they have children for three generations?”

The Uyghurs had been in Thailand for over a year, along with others who had fled China and claimed to be Turkish, the spokesman, Verachon, said. Thai authorities sought to verify their nationalities before relocating them, he said.

“We found that about 170 of them were Turkish, so they were recently sent to Turkey,” he said. “And about 100 were Chinese, so they were sent to China as of this morning, under the agreement that their safety is guaranteed according to humanitarian principles.” He denied reports from Uyghur activists that the refugees resisted deportation and some had been hurt.

Two witnesses who saw the Uyghurs being led into trucks to be driven to Bangkok’s military airport.

Two witnesses who saw the Uyghurs being led into trucks to be driven to Bangkok’s military airport said the men were handcuffed and some of women were crying and shouted, “Help us! Don’t allow them to send us back to China.”

Bilal Degirmenci and a colleague from the Turkish humanitarian group Cansuyu said they were forced by police to delete photos and videos they had taken of the Uyghurs, and were threatened with punishment if any were published or posted on the Internet.

The Uyghurs are a Turkic-speaking Muslim minority in China’s far western Xinjiang region. The group has complained of harsh cultural and religious suppression as well as economic marginalization under Chinese rule.

China’s position is that the Uyghurs left the country illegally. Beijing has accused Uyghur separatists of terrorism in Xinjiang, where ethnic violence has left hundreds of people dead over the past two years.

In Turkey, which agreed to take in the other 170 refugees despite China’s objections, mostly Uyghur protesters vandalized the Thai Consulate in Istanbul. The office was closed on Thursday.

Police allowed about 100 protesters to pray outside the consulate before taking nine of them away for questioning.

The Thai Embassy issued a statement urging its nationals in Turkey to be on alert.

“The extradition is a dirty political deal between the Thai and Chinese authorities,” spokesman Dilxat Raxit said in a statement.

The repatriation echoed a December 2009 incident when Cambodia deported 20 asylum-seeking Uyghurs to China over the protests of the U.N., which rushed people to the airport in an attempt to physically prevent their expulsion.