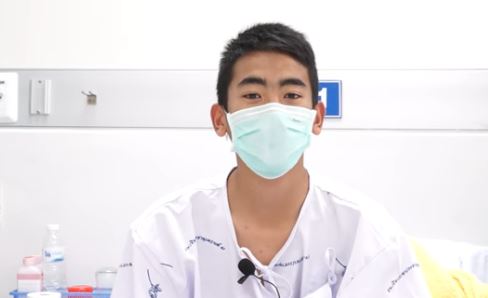 One of the 12 soccer players rescued from Tham Luang cave, on July 10, 2018. (Thai Ministry of Public Health via Storyful)
Asia & Pacific

The 12 rescued Thai soccer players and their coach were seen in good spirits in July 13 footage taken at a Chiang Rai hospital, where they were receiving treatment. In the video, the boys from the Wild Boars soccer team thanked those who rescued them and said they can’t wait to go home and shared the foods they are looking forward to eating, including fried crispy pork, sushi, steak and KFC, according to translations provided by Chiang Rai Times. Ekarat Wongsukchan, whose nickname is Biw, raised his arms in a victory stance, provoking laughter from the other boys.

“Hello, my name is Biw, I am fine. I want to say thanks to everyone that worried,” he said. A former Navy SEAL diver, Saman Gunan, died on July 6 during the rescue operation. The boys learned about his death on July 14, after medics deemed them mentally strong enough to handle the news. The Wild Boars and their coach were rescued on July 10, more than two weeks after becoming trapped in a cave on June 23. Public Health Minister Dr. Piyasakol Sakolsattayatorn said at a news conference that the boys, who range in age from 11 to 16, are expected to be released on Thursday. Some of the boys contracted minor lung and middle ear infections while in the cave.“Psychologists have been talking to the kids, with the kids, their mental well-being is good today,” he said. “Even though they are about to leave in the days ahead … they aren’t as strong as a normal person, they still need to rest and improve their health, and body.”Video Credit: Thai Ministry of Public Health via Storyful