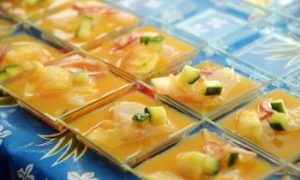 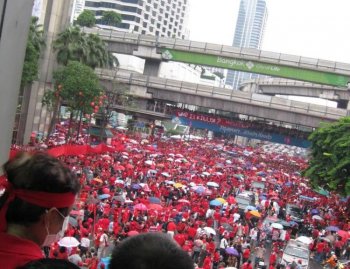 BANGKOK—Despite Bangkok being under a state of emergency prohibiting gatherings of more than five people, thousands of red shirt anti-government protestors peacefully rallied in central Bangkok on Sunday September 19.

The rally was held on the anniversary of the 2006 military coup which ousted the red shirts’ patron, former prime minister Thaksin Shinawatra, from government and to also commemorate the 91 people (mostly civilians) killed during the more recent political violence.

Prior to Sunday’s event the government had said they would allow the rally as long as it remained peaceful and did not obstruct traffic. However, due to the sheer number of protesters spilling onto to the streets, the majority of roads in the area were closed down, and only one lane was functioning at a trickle.

Protestors held street theatre, danced and sang in the same intersection which their movement had closed down during April-May in a bid to force Thai Prime Minister Abhisit Vejjajiva to dissolve parliament and call an early election.

While street vendors sold food, clothing or red shirt paraphernalia during Sunday’s rally, not far away was the remains of South-East Asia's second largest department store that was set ablaze by hardcore protestors after the Thai military stormed their fortified encampment on May 19.

Police were on standby observing the rally which was due to finish at 8 p.m.

Media reports that numerous other rallies were held in other parts of the country.