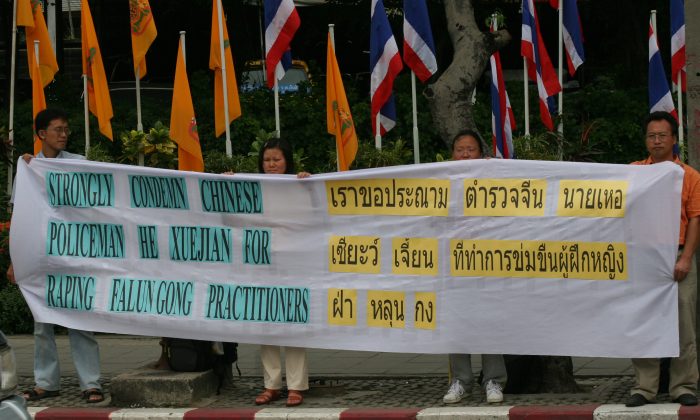 BANGKOK – Thai police, under pressure from Chinese envoys in Thailand, have harassed participants in an ongoing protest outside the Chinese embassy in Bangkok. This week they threatened to arrest all non-Thai nationals participating in the demonstration that calls attention to the rapes of two Falun Gong women by police in China in late November.

About 20 people began a daily protest in front of the Chinese embassy on December 6, holding banners condemning the rapes as well as the ongoing persecution of Falun Gong in China. Participants meditated or held signs.

“In this rape case, I feel it is my duty as a practitioner and as a woman to appeal. It is a natural reaction, when practitioners suffer this kind of disgusting treatment,” said Chen Hua, a Chinese refugee in Thailand who was incarcerated for years in China’s notorious labor camp system, and tortured extensively in the process.

The case in question involves Zhuozhou City policeman He Xuejian raping two middle-aged women in succession in late November, and doing so with impunity with at least one other officer present. The women were left beaten and traumatized, and police further degraded them after by making them clean the station.

“This is not a way that human beings behave, it’s like a beast,” said Wang Yajun, another Falun Gong refugee protesting in front of the Chinese embassy. He described the incident as part of the Falun Gong policy instituted by Jiang Zemin in 1999, “to destroy their reputations, bankrupt them financially, and destroy them physically.”

The following day, one police officer admitted that they were checking passports because the protestors were Falun Gong and that they were acting at the behest of Chinese embassy. Embassy officials were unavailable for comment.

On December 10, United Nations World Human Rights Day, the police, who outnumbered practitioners, became more aggressive. Officers confiscated banners and posters, randomly searched bags, tearing one apart, manhandled several practitioners, and threatened at least one with arrest. It was unclear if some of the plainclothes officials were genuine police or Chinese embassy staff.

On December 13, a Thai Special Branch officer warned the group that all non-Thais who showed up the following day would be arrested. The order had come from “higher up” he said. With respect to protest-type activities by non-Thai nationals, Thai law is vague and can be applied according to police discretion.

The police Special Branch said that it does not grant media interviews.

Chinese Communist Party pressure on the Thai government is not a new phenomenon. In 2003, Swedish Falun Gong practitioner Pirjo Svensson was arrested. She broke no laws, and no explanation was given although her arrest coincided with the Chinese Premier’s visit to Bangkok. Svensson spent 37 days behind bars in a Thai immigration detention center and was eventually deported without any charges ever being laid. At that time, Falun Gong practitioners were also told that the orders came from “higher up.”

Why do the refugees go to all this trouble? Reflecting on the rapes that prompted the protests in the first place, “If I keep silent in front of such treatment [of people], I wouldn’t have the right to call myself a practitioner or even a person,” said Chen.