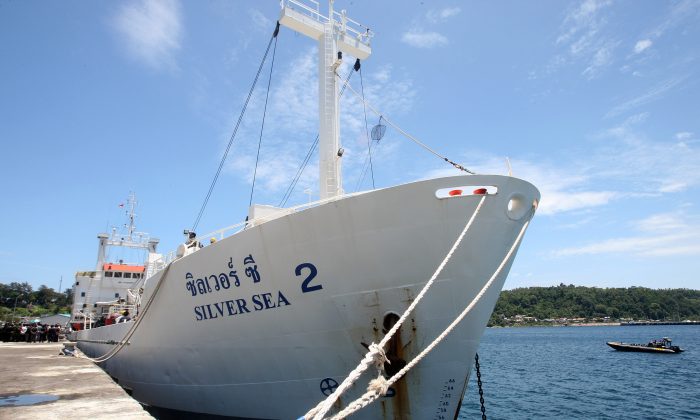 SABANG, Indonesia—The Thai captain of a seized cargo ship carrying an estimated $2 million worth of seafood has been arrested in Indonesia on suspicion of illegal fishing, in the latest development linked to an Associated Press investigation that uncovered a slave island earlier this year. At least one other crew member is still under scrutiny.

The massive Thai-owned Silver Sea 2 was first identified by AP in July through a high-resolution photo taken from space, showing slave-caught fish being loaded onto the refrigerated vessel in Papua New Guinea’s waters. The AP then tracked the ship through its satellite beacon and informed Indonesian authorities when it crossed into their waters on its way home to Thailand.

Friday’s arrest is one of at least 10 made in Indonesia and Thailand since the investigation tied the catch of migrant workers forced to fish to the supply chains of major U.S. food sellers and pet food companies six months ago. As a result, more than 2,000 men from Myanmar, Thailand, Cambodia and Laos have been identified or sent home, a multi-million dollar Thai-Indonesian fishing business has been shut down, class action lawsuits have been filed and new laws have been introduced.

Touring the Silver Sea 2 on Friday, Indonesian Fisheries Minister Susi Pudjiastuti said she believed the frozen fish filling up its holds came from eastern Indonesia’s Arafura Sea, where foreign fishing vessels are banned. She also said authorities are looking further into evidence that suggests the ship may be linked to the human trafficking ring described by AP. The Silver Sea 2 is accused of receiving illegally caught fish at sea and turning off its satellite beacon. Its remaining 16 crew members will be deported.

Pudjiastuti said she hoped anyone found guilty would face harsh punishment as a deterrent, and added the vessel may be destroyed. Indonesia has already blown up dozens of smaller foreign boats accused of illegal fishing. The 2,285-ton ship is now at a naval base in Sabang in the country’s far northwestern tip where it was seized last month.

“If the court decides it should be confiscated, then we will sink it,” she said.

Thailand’s fishing industry, worth $7 billion a year in exports, relies on tens of thousands of poor migrant laborers who come seeking jobs mainly from neighboring countries. They often are tricked, sold or kidnapped and put onto boats sent to distant foreign waters to fish. Refrigerated cargo ships are used to pick up seafood and sometimes transport new slaves, although no victims of trafficking were found on the Silver Sea 2.

Late last year, AP journalists saw slave-caught fish being loaded onto another reefer owned by Silver Sea in the Indonesian island village of Benjina, where men were found locked in a cage for asking to go home. In written surveys conducted with nearly 400 rescued slaves, several also told AP they were trafficked to Indonesia from Thailand aboard Silver Sea ships, including Silver Sea 2.

The high-resolution photo taken from space for AP by U.S.-based commercial satellite imagery company DigitalGlobe showed the Silver Sea 2 in Papua New Guinea with its holds open and a trawler tethered to each side, loading fish. Analysts identified the smaller boats as among those that fled Benjina earlier this year, crewed by enslaved men who said they were routinely beaten and forced to work nearly nonstop with little or no pay. Another Thai cargo ship was also impounded in Papua New Guinea after eight trafficking victims were found on board.

The AP’s work was entered into the U.S. congressional record for a hearing, after links were made to the supply chains of American companies such as Wal-Mart, Sysco, Kroger, Fancy Feast, Meow Mix and Iams. The businesses have all said they strongly condemn labor abuse and have taken steps to prevent it. Congress is scheduled to discuss the AP findings again later this month.