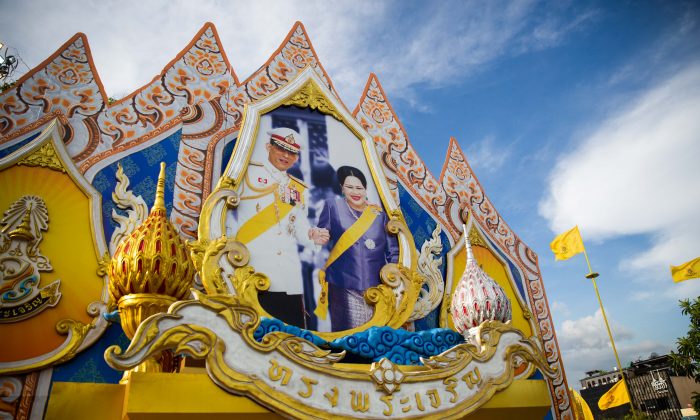 A portrait of King Maha Vajiralongkorn and his mother, Queen Sirikit, hang near the Thai Royal Palace ahead of The Royal Coronation in Bangkok, Thailand, on May 2, 2019. (Lauren DeCicca/Getty Images)
Asia & Pacific

Thailand’s authorities arrested three social media influencers on Thursday for allegedly insulting a member of the royal family in an e-commerce video commercial.

In the video, Chaokuwiang wears a traditional Thai costume and sits in a wheelchair, while Aniwat plays the role of her daughter, who accuses her of stealing clothes. The video was removed after it went viral in May.

Monarchists were outraged by the video because Chaokuwiang’s character seemed to insult Thailand’s Princess Chulabhorn, who uses a wheelchair and suffers from an autoimmune disease.

Netizens criticized the video for being offensive to disabled people and launched a boycott against Lazada.

The Royal Thai Army also banned Lazada from delivering packages to army premises, while Thai Prime Minister Prayut Chan-o-cha said that “the law will take its course” with regards to the commercial video.

Lazada, a Singapore-based company owned by China’s Alibaba Group, issued an apology statement on May 6 and said that it “does not condone the mockery of others, including those with disabilities.”

“We fully recognize that the content was hurtful and demeaning to human dignity. As soon as we became aware of the incident, we immediately demanded the post to be taken down,” the company said.

The three influencers were released on bail of 90,000 baht ($2,551) each, according to local reports. They were charged with lese majeste, which carries a maximum sentence of 15 years in prison.

The lese majeste provision of Thailand’s criminal code prohibits people from defaming, insulting, or threatening the royal family. Human rights groups have repeatedly expressed concern over the law, claiming that it restricts the right to freedom of opinion and expression.

About 201 individuals in Thailand, including 16 children, have been charged under the lese majeste law between Nov. 24, 2020 and June 16, 2022, according to the Thai Lawyers for Human Rights.

The International Federation for Human Rights (FIDH) stated that some lese majeste defendants face numerous prosecutions and prison sentences ranging from 120 to 300 years.

FIDH secretary-general Adilur Rahman Khan in a statement called on the government to put an immediate end to the lese majeste law and comply with its international human rights obligations.

“At the current pace of prosecutions, and given the traditionally high conviction rates in lese-majeste trials, Thailand may soon become one of the countries with the highest number of political prisoners in the region,” Adilur said.