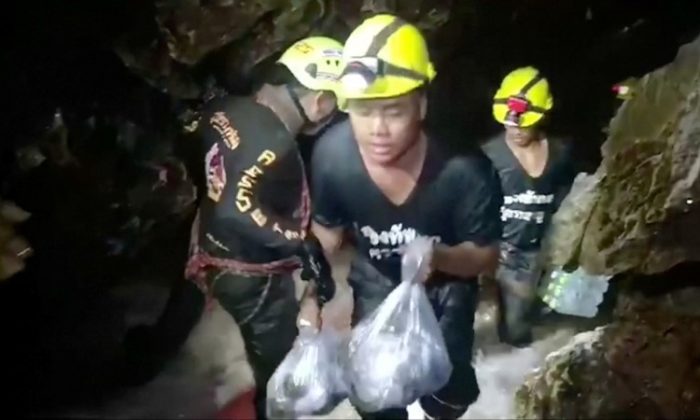 Four boys sent to the hospital
By Jack Phillips

Officials said that after four Thai boys were rescued from a flooded cave, the next rescue would take place in 10 to 20 hours, after officials can assess conditions in the cave, meaning that the next rescue will be postponed until the next day.

Chiang Rai provincial Gov. Narongsak Osatanakorn confirmed that authorities will now assess conditions at the cave and will replenish oxygen tanks needed for the rescue, he said in a press conference.

“There are two obstacles, which are water and time,” Narongsak said in the press conference. “We have tried all possible ways to get the boys out, but sometimes we can’t win over nature.”

Later, Narongsak said on Sunday that “four survivors were safely extracted out of the flooded cave and are now in the hands of doctors at Chiang Rai Prachanukroh hospital,” according to a Thai public broadcaster.

Four boys were seen on stretchers when they emerged from the cave. “They’re now in hospital, some via chopper, some via road ambulance. Rescue mission to resume after masks/gear checked over and tanks replenished,” wrote Daniel Sutton, an Australian journalist.

“Our job is not completely done,” Osatanakorn said, according to The Guardian. “We will have to do the next mission as successfully as the one we did today. The rest of the kids are in the same spot.”

“Air tanks and systems have to be put in place again,” he said. “I can’t tell you exact timing of the next operation but I can say it will be more than 10 hours to 20 hours. It will not be more than 20 hours. I have to check all factors are stable. The operation then will be carried out.”

In all, 13 foreign divers and five Thai Navy SEALS were involved in the rescue, according to reports. They have to make a 2.4-mile trek through the flooded cave complex.

Bursts of heavy monsoon rain soaked the Tham Luang Cave area in northern Chiang Rai province on Sunday and storms were expected in the coming weeks, increasing the risks in what has been called a “war with water and time” to save the team.

The boys, aged between 11 and 16, went missing with their 25-year-old coach after soccer practice on June 23, setting out on an adventure to explore the cave complex near the border with Myanmar and celebrate a boy’s birthday.

The rescue teams had rehearsed the plan for several days, Narongsak said, and had managed to drain the water level in the cave considerably, but needed to move fast.