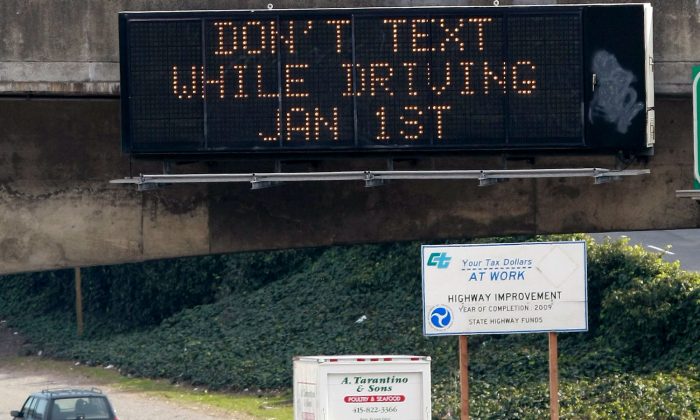 Cars drive on Interstate 280 by a notification of a texting while driving law in San Francisco, Calif. on Dec. 29, 2008. A survey published May 5, 2013, shows many such laws in the United States are not being enforced. (Justin Sullivan/Getty Images)
US

Texting While Driving Laws Not Being Enforced: Survey

Though laws against texting while driving are in 39 states and the District of Columbia, there’s little chance in most of these states of getting a ticket, according to a survey from USA TODAY.

In at least a half a dozen states, there are fewer than 10 tickets being handed out a month. For example, in North Dakota, the Highway Patrol has only issued 117 citations since the law was enacted Aug. 1, 2011.

However, the statistics are not the complete picture, because they don’t count ticket by city and county police agencies, instead using those issued by state police or troopers.

“No one seems to really know (how often police are writing texting citations),” says Peter Kissinger, president and CEO of AAA Foundation for Traffic Safety, which is in the middle of a major study to determine how many texting citations are issued annually.

Driving while texting is a big problem, in terms of danger. It’s six times more dangerous than driving while drunk, according to a study by David Hanson at the State University of New York. He cites a Harvard Center for Risk Analysis that puts over 3,000 deaths and 330,000 injuries per year on people driving while texting.

“Research in Great Britain has found that texting behind the wheel is more dangerous than driving while intoxicated or under the influence of marijuana (cannibis),” he writes, citing the Transportation Research Laboratory. For example, the ability to keep a vehicle in a lane dropped by 91 percent for drivers who were texting, compared to 35 percent if they had been smoking marijuana.

Over one-third of drivers polled in 2011 by HealthDay said they have sent or received text messages while driving, and 18 percent said they do it regularly.

While state police and troopers are in some cases not giving out many tickets, the number of tickets given out typically grows by each year after a law is enacted.

“The totals can sometimes be misleading,” says  Louisiana State Police Doug Cain, explaining that troopers sometimes cite texting drivers for some other offense, such as crossing the center line or speeding. “The number of citations may not be indicative of the actual traffic stops for texting while driving.”