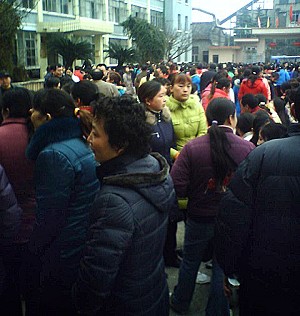 Employees of the First Textile Co. Ltd. of Sichuan Cotton and Ramie Group in Santai County began a large-scaled strike on February 18, 2008. By Monday, February 25, the company had still not resumed normal operations.

Sources say that on February 18, an employee tried to express grievances to the company's chairman, Xie Fanggui. Xie not only refused to listen, but verbally attacked this worker, causing strong discontent among the over 2,800 workers in the company. The incident prompted the entire staff to stop working that afternoon and they demanded that the company give workers a reasonable answer.

The company started to restructure in 2003. In accordance with national policy at the time, the company was supposed to give each employee a compensation for transformation of enterprise of 708 yuan (US$99.49) for each year of their service. However, this compensation has yet to be paid. For a long time, the company has not implemented the “Labor Law” or various policies and regulations, and even forces employees to work overtime without pay.

One worker, who declined to be named, said that the key demand for this strike is the issue of compensation. “The company has over 2,000 employees, plus retired workers—a total of over 4,000 people. Today, no one worked. Even those entering the factory did not work,” he said.

When reporters called First Textile Co. Ltd. to investigate this story, someone at the factory replied, “We are handling it,” and then immediately hung up. When the reporter called again, nobody answered the phone.

A staff member at the Santai County government stated that work at the textile company had already resumed, and that the strike was over. He said the strike was due to complaints that salaries were too low. The county authorities supposedly responded to such complaint by promising the textile workers a wage increase.

The anonymous worker indicated that workers were not yet informed about the wage increase, as he heard the details of the matter was still under discussion.

The workers reported that the wages in this company are extremely low. The majority of staff only received a raise of 30 yuan ($4.22) in over 10 years. Moreover, workers have had their welfare cancelled. The employees work in three shifts a day. Each month, each employee can receive at most 300 to 400 yuan ($42.16 to $56.21).

According to Chinese news website http://bbs.scol.com.cn, the local authorities sent many policemen to stand outside the firm. They also sent fire trucks, squad cars and other vehicles. Company officials also tried to persuade each worker to go back to work, but were met with firm opposition.

“I have worked in the factory [forerunner of the company] for over 30 years. Ever since Xie Fanggui came to power, we have suffered so much. We are basically plumb broke now, as he caused the loss of state-owned assets. In his eleven years of head in the factory, Xie has always been so heavy-handed, and has shown little concern for the issues facing the workers. This is an enterprise that had once run for 40 years without a loss, yet now its workers' minimum living standard cannot even been guaranteed,” wrote an elder factory worker on http://bbs.scol.com.cn.

Another worker complained that textile company employees are so poverty-stricken that they receive a monthly wage of only 300 yuan. As prices throughout the country continue to rise, these wages are not even enough to cover basic necessities. Meanwhile, Xie Fanggui's children are studying overseas in the United States for long periods of time, and he has several villas in the cities of Chengdu and Mianyang, Sichuan.