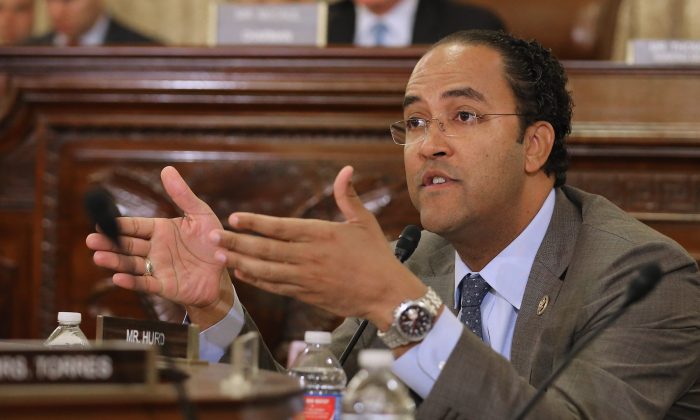 Rep. Will Hurd (R-Texas) on Capitol Hill in Washington on Oct. 21, 2015. On Aug. 1, Hurd announced he would not run for re-election. (Chip Somodevilla/Getty Images)
Politics

‘Texodus’ Wave of GOP Retirements May Not Boost Dems as Expected

WASHINGTON—Democrats are beside themselves with excitement, thanks to the “Texodus” of 11 Lone Star State Republican incumbent congressmen either losing reelection bids or retiring since President Donald Trump entered the Oval Office in 2017.

“When it comes to where House Democrats can go on offense, it doesn’t get any bigger than Texas,” Democratic Congressional Campaign Committee (DCCC) Chairwoman Rep. Cheri Bustos (D-Ill.) said earlier this year.

“In 2018, Texas Democrats proved that they can win in competitive districts. That’s why we are continuing our investments in the Lone Star State by opening a new DCCC: Texas Headquarters,” Bustos said in an April announcement.

The DCCC added six veteran campaign staffers in the new operation, which is based in the state capital of Austin and augments an ongoing expansion of state and national party resources that began there before 2018.

Democrats defeated Texas GOP incumbent Reps. Pete Sessions and John Culberson in November 2018, two key wins in the party’s sweep back into power in the House of Representatives for the first time since 2011.

The Democrats’ new-found Texas strength wasn’t just in congressional races, either. In once heavily Republican Harris County (Houston), for example, voters swept out 58 GOP county judges and replaced them with Democrats.

Those were intoxicating results for a party that had been out of power in Texas for more than two decades. Anne Richards, the state’s last Democratic governor, left office in 1995.

Now, they hope to win more congressional seats and the biggest prize, the state’s 38 electoral votes for president, last won by Jimmy Carter in 1976.

But then came a span of 12 days, when Rep. Pete Olson announced his retirement on July 25, followed by Rep. Mike Conaway on July 31, Rep. Will Hurd on Aug. 1, and Rep. Kenny Marchant on Aug. 5.

By any measure, these were devastating losses. Between them, the 11 Republicans represented 212 years of seniority, plus lost committee chairmanships of importance to the state with Hensarling (Financial Services) and Smith (Science, Technology).

But Texas political experts interviewed on Aug. 13 by The Epoch Times cautioned Democrats about declaring victory prematurely and Republicans against giving up, when so much remains to be seen in the 2020 presidential race.

Democrats are convinced that Trump, who carried Texas by nine points in 2016, won’t do nearly so well in 2020, thanks to four years of what they characterize as constant scandal, Twitter wars, and continuous upheavals in the administration.

With such a leader, they believe, dispirited Republicans will be overwhelmed by legions of newly enfranchised and motivated Hispanic and millennial voters, leading Democrats to more victories.

Or maybe not, cautioned Bill Miller, a longtime Texas political campaign consultant who is well-connected and respected in both major parties, in an interview with The Epoch Times.

“What I tell people is, I listened to the first two Democratic debates and I have to say, the first one was hard to watch because it was, you know, crazies,” Miller told The Epoch Times.

“But the second one was, ‘Yeah, we want to get rid of all hydrocarbons.’ They want to put Texas out of business, I mean that’s the subtext of that,” he continued.

Miller was referring to Democrats’ Green New Deal environmental proposal to end the use of all fossil fuels, including oil and natural gas, which have long been at the heart of the booming Texas economy.

“If they nominate a candidate like Elizabeth Warren or Kamala Harris, or somebody like, God forbid, Bernie Sanders, if they nominate somebody who is extremely left of center, they’re not going to get there,” Miller said.

Matt Mackowiak, another veteran Texas campaign strategist, told The Epoch Times that “Democrats didn’t really pay the price for their ideas in the last cycle in the same way they will in the next one, when they have a presidential nominee. They’re going to have to defend Medicare for All, the Green New Deal, all their other crazy ideas, so we’ll have to see.”

Mackowiak added, “Look, we knew going into this cycle there would be eight competitive congressional seats, and there still are eight. The only thing that has changed is that three of them now are going to be open seat races rather than have Republican incumbents.”

He believes Republicans can still hold the seats, although he sees Hurd’s district, which is on the border with Mexico and was carried by Hillary Clinton in 2016, as the toughest to retain.

Mackowiak also dismissed claims the GOP retirees feared losing re-election bids. “I think it was more of a lifestyle decision for those individuals than it was a conclusion that they can’t win or it’s going to be tough.”

Even so, Republicans had better not take Texas for granted in 2020, The Epoch Times was told by a well-known national Republican fundraiser who asked not to be identified.

“If you look at these members in these congressional districts in the last three cycles, they have lost, they’ve lowered their vote totals,” the fundraiser said. “In some of these districts, we actually had a higher turnout in 2018 than we did in 2016 [when there was a presidential election at the top of the ticket]. Some of that is the huge growth that Texas has experienced.”

But there is an uptick in Democratic strength in several Texas suburbs, the fundraiser said, pointing to Democrat Sri Kulkarni, who lost in 2018 by four points to Olson, whose suburban Houston district was hit hard in 2017 by Hurricane Harvey.

“He came very close to beating Pete and people say it was because of ActBlue [an internet company that enables Democrats and progressives to raise money online], but it wasn’t. ActBlue may have been a component of it, but Sri raised over $800,000 in the district alone,” the fundraiser said.