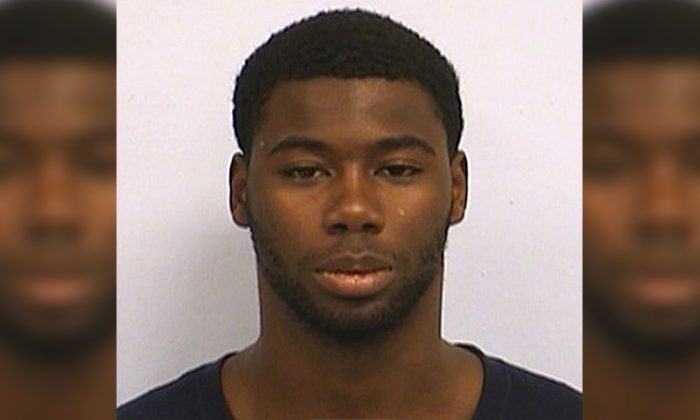 A 20-year-old Texas man has been sentenced to life in prison for raping and killing a University of Texas freshman dance student in 2016.

Meechaiel Criner will spend at least 40 years behind bars for his crimes. He could not be executed because he was only 17 when he committed the crimes.

Criner was living on the streets of Austin when he committed the crime.

Criner was convicted of assaulting and killing 18-year-old Haruka Weiser on April 3, 2016, as she crossed the UT Austin campus, heading home after a leaving a late class at 9:30 p.m. Her body was found two days later alongside Waller Creek, a wooded area of the campus.

Criner came to the attention of law enforcement when he started a fire in a large bin, Austin Patch reported. Some of the burning items turned out to belong to Weiser.

Information from firefighters, coupled with a tip called in saying Criner looked like a person seen following Weiser in security camera footage, led to Criner’s arrest. After his arrest authorities found Criner had more of Weiser’s possessions, including her MacBook, NBC reported.

During his trial, it was revealed that for years, Criner had been writing stories describing sexual assaults similar to the one he perpetrated upon Weiser, KXAN reported.

Weiser’s father, Thomas Weiser, referenced those stories in his victim impact statement prior to sentencing.

“Haruka did not choose to sacrifice herself. You made that choice for her. But she did not die in vain. We will never know how many lives she saved through the events of her death,” Weiser told the judge,according to KXAN.

“I wish she was still here where I could see her, but I do find comfort in knowing that she helped stop a serial killer in his tracks,” he said.

Haruka Weiser, originally from Portland, Oregon, was a dance major who specialized in ballet and hip-hop.

In an interview with Dance West, a Beaverton, Oregon, dance academy she attended for four years, Weiser explained, “I’ve been dancing in my living room for as long as I can remember but I began training at ACMA in the 6th grade.”  (ACMA is the Arts and Communication Magnet Academy, a specialty school in Beaverton.)

“My favorite styles of dance are ballet and hip-hop,” she added. “I love the precision and grace of ballet, but at the same time I enjoy the freedom and challenges I find in hip-hop.”

In a 2014 article in the Portland Tribune, Weiser explained how the cycle of preparation and performance consumed her life.

“Every time before a show, for me at least, it gets really rough. I’ll be like, ‘I want to quit. I never want to dance again.’ And as soon as the show happens, I’m back in it,” she said.

“It really is a rush. There really is nothing like it, and it is so short. To people who maybe are more logical than me, it’s not worth it. But somehow that cycle of it just keeps happening over and over again and keeps you going.”

Weiser had even bigger dreams. She planned to declare pre-med a double-major, a family member told the Austin Statesman. Her father, Dr. Thomas Weiser, was a military veteran who focused his career on improving medical care for Native Americans.