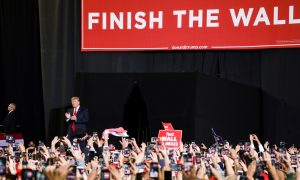 A 33-year-old Texas woman died after a large rock that was apparently thrown from an overpass crashed through her car’s windshield.

The incident unfolded as her boyfriend and children sat inside the vehicle, reported KWTX.

Keila Ruby Flores was in the vehicle with her boyfriend, Christopher Rodriguez, and her kids when the rock crashed through the windshield at around 8:40 p.m. on March 9.

Keila Ruby Flores, 33, was in the front passenger seat of a vehicle traveling northbound with her family on I-35 between…

She was in the front passenger seat at the time.

“[We were] headed back to Waco on 35 northbound, all of sudden something just strikes the window,” Rodriguez told KWTX.

He said that “an explosion just comes right through the window,” according to the report.

“I didn’t know what it was,” Rodriguez added. “I look over and I see Keila and she is laying there unresponsive.”

What a tragedy. People need to be be SO MUCH MORE CAREFUL!

Rodriguez said he tried “shaking” Flores to wake her up.

“She was unresponsive,” he said before calling 911.

Police in Temple, Texas, said an unidentified person tossed a rock from a railroad track overpass before it landed on her vehicle.

They were traveling on Interstate 35 between exits 303 and 305 in Temple, according to KCEN-TV.

Flores was taken to the hospital with “significant injuries” and was pronounced dead at 10:30 a.m. on March 10.

Officials didn’t release information about a suspect but said the incident is being treated as a homicide.

Temple police are investigating a homicide. They say a woman had died after a large rock was thrown from an I-35 overpass and struck her while she was riding in a vehicle.

They urge anyone with information about the case to come forward and contact them at (254) 298-5500.

An autopsy has been ordered in her death, News4 reported.

In Central Texas, according to KWTX, similar incidents have taken place.

In 2013, two juveniles were arrested in Waco, Texas, after chunks of concrete were thrown from an overpass, damaging eight vehicles. Several people were injured.

The suspects were ages 11 and 13, it was reported.

Original article from 2014 on the Sharon Budd incident:

In 2014 in Pennsylvania, Sharon Budd, 53, was seriously injured when a rock smashed through the windshield of her car. She was blinded in one eye, according to reports.

Several teenagers were arrested in the case, reported the Daily Item.

And in Flint, Michigan, 32-year-old Kenneth White, a father of four, was killed after teens threw a six-pound rock from an overpass onto his car in 2017.

They agreed to plead guilty after the murder charge was downgraded to manslaughter in 2018.

“Why him? He was trying so hard to get his life back together and doing so good,” White’s aunt, Nancy Vizcarra, told ABC12.