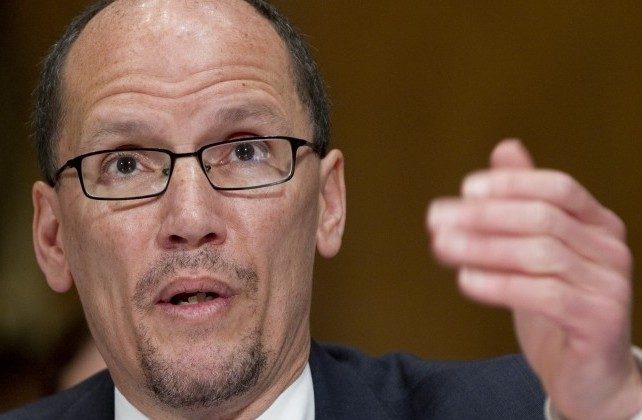 The federal government on Monday blocked a new Texas law that requires voters to present government-issued identification before voting in elections.

In the law, Texas voters would have to show identification that they had never had to show in the past, which could prevent 603,892 to 795,955 people—or 4.7 percent to 6.2 percent of the state’s population—from voting in elections, the U.S. Department of Justice said in a letter sent to state officials.

“Even using the data most favorable to the state, Hispanics disproportionately lack either a driver’s license or a personal identification card,” Thomas Perez, the assistant attorney general, said in the letter, adding that such a “disparity is statistically significant.”

Furthermore, the majority of those people who do not have identification are Hispanic, are another minority, or are poor, making the law discriminatory, the letter said. The Justice Department invoked the Voting Rights Act to block the law from going into effect.

“We conclude that the state has failed to meet its burden of demonstrating that the proposed law will not have a retrogressive effect,” Perez said.

The Voting Rights Act of 1965 gives rights to the federal government to regulate changes in voting procedures in states, especially in areas that have a history of discrimination toward certain segments of society.

The law also would not do much to prevent in-person voting fraud, as it would be addressed by current state and federal laws, the Justice Department said.

Proponents of the law have argued that the law prevents voter fraud from taking place in elections.

Texas is one of eight states to require state-issued photo identification to vote in elections. In December, the Justice Department blocked a similar law in South Carolina.

The American Civil Liberties Union (ACLU) supports blocking the law and stated on Monday that it “would have a devastating impact on the right to vote in our country’s second most populous state.”

In a statement, Texas Governor Rick Perry, a Republican, said the move “is yet another example of the Obama Administration’s continuing and pervasive federal overreach,” adding that Texas should be responsible for its elections.

“The DOJ has no valid reason for rejecting this important law, which requires nothing more extensive than the type of photo identification necessary to receive a library card or board an airplane,” Perry said.

He said the blocking of the law “is no surprise” but said the Supreme Court ruled that voter identification laws are not discriminatory and are in accordance with the Constitution.

“Several other states—including Georgia, Indiana, Kansas and Wisconsin—are allowed to require photo identification to vote,” he added. “Texas should not be treated differently and must have the same authority as other states to protect the integrity of our elections.”