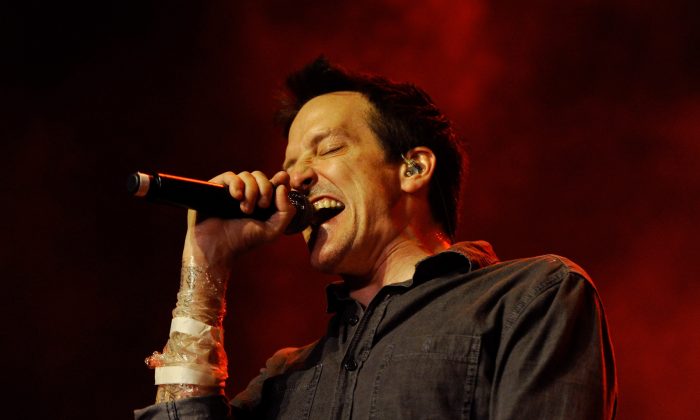 Filter singer Richard Patrick performs at The Joint inside the Hard Rock Hotel & Casino as the band tours in support of the album, "The Trouble with Angels" in Las Vegas, Nevada on Sept. 29, 2011. (Ethan Miller/Getty Images)
US News

A venue canceled an American rock band concert in El Paso, Texas after band members posted an anti-Trump comment on social media and displayed an upside-down American flag as part of their video-screen backdrop.

Rock band Filter was scheduled to perform Speaking Rock Casino in El Paso, Texas, on March 7, but their effort to do a last-minute promotion of their show along with their digital flag display offended the venue, which caused the concert to be canceled, the band said.

The post consisted of a video of the band’s sound check with the caption: “This is sound check!! We’re Playing El Paso!!! Get here later and it will be packed!! A lot of Trump bashing! Does anyone know Beto?? Bring Beto!”

Speaking Rock Entertainment Center general manager Karl A. Maahs told Billboard that he chose to cancel the concert as he did not want to turn the show into an anti-American political rally.

He told Billboard that the band’s singer wanted the venue to show graphics on an upside down American flag, but his staff “didn’t feel comfortable doing that.”

“We’re not gonna stop in the middle of the show, put an American flag upside down and desecrate it so we could turn a rock show into a political rally,” said Maahs.

“[W]e’d rather cancel the show than be in the spotlight with all this anti-American political thing, especially when it came down to the American flag being hung upside down for the show and being desecrated,” he added.

According to Filter frontman Richard Patrick, who told Billboard, he requested the lighting staff to “to turn [the flag image] upside down and make the colors all trippy and weird like it’s a bad acid trip.” But he said he told the venue he would not use it after the venue told him it was illegal to display the flag in that manner.

After the cancelation, the band wrote that their show was canceled because the venue told them they didn’t like the anti-Trump post and the venue was receiving “threatening phone calls and bomb threats from Texans who didn’t like it either.” The band claims their tour manager was taking a nap when the venue’s general manager and about 30 security guards came in shouting expletives and telling the band they were not welcome at the venue.

Patrick said the touring manager tried to explain it was the singer’s First Amendment right to express his views, but the general manager told them the First Amendment did not exist at the venue.

In response, Maahs said the band’s description of what happened in the green room was “overplayed.”

He continued, saying, “the tour manager came up to me and he was very apologetic and I told him that if he could get [Patrick] to stop tweeting and stop the Facebook stuff and stop mentioning our names and just let this go that would be great, and he got all super pissed off and started talking about his First Amendment rights, and I said, ‘You know what? Just get your equipment and go.’ And he acted like we were going to take his equipment, so I did say, ‘Yeah, just get the [expletive] outta here.’ But I didn’t say, ‘There’s no such thing as the First Amendment’—that’s not what was said.”

In a subsequent statement, Patrick told Billboard he did not believe Maahs’s explanation and questioned why the venue did not call the law enforcement if there were bomb threats.

According to Title 4 of the U.S. Code, “the flag should never be displayed with union down, except as a signal of dire distress in instances of extreme danger to life or property.”