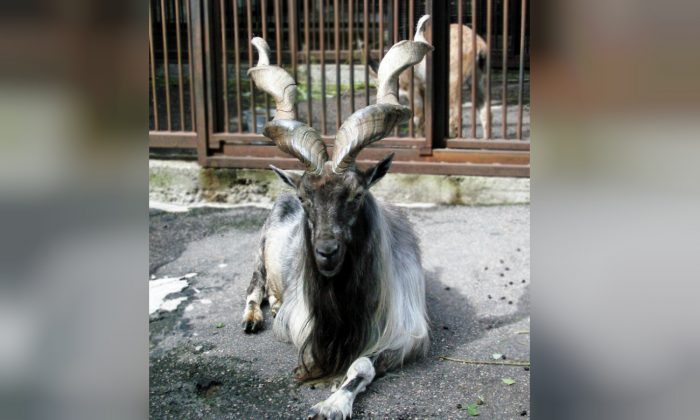 A Texan trophy hunter forked out $110,000 to shoot the endangered screw-horned-goat—the highest ever price to bag one of the few thousand remaining animals in the mountains of Pakistan.

Every year, a handful of licences are granted to trophy hunters as part of a scheme which supporters say paradoxically helped saved the rare Astore markhor from extinction after its population dropped to just a few hundred.

The markhor is the national animal of Pakistan.

Those licenses are usually bought by foreign trophy hunters who can afford the hefty price-tag, along with licenses for other rare game.

Footage has emerged on youtube of the moment Texas big game hunter Bryan Kinsel Harlan shot a markhor earlier this month, after paying the highest ever fee—$110,000—according to the Pakistani TV station Samaa.

This year, just four licences were granted to hunt the markhor—famed for its twisted horns.

The licenses are auctioned to the highest bidders.

Harlan’s tracking and hunting were recorded and shared in a montage video that has been posted on social media.

Cradling a gun on the mountainside, Harlan leans into the camera and says “it’s 230 yards.” The video cuts to two goats. As a shot rings out, the larger long-horned animal leaps into the air after an impact can be seen rippling along its flanks.

Harlan can be seen high-fiving someone in the group of men accompanying him on the hunt. The video then cuts to the men dragging the animal’s body up the mountain.

Harlan later poses behind the goat, patting its back.

“It is an honour and privilege to be back in Pakistan,” Harlan said, according to Samma. “This is the third time I am in Pakistan. I have hunted almost all animals here. I saved the markhors for the last,” he said. “It was quite an adventure.”

Markhors are protected by local and international laws like the Convention on International Trade in Endangered Species. The majestic animal can be found in Gilgit-Baltistan, Chitral, Kalash Valley, and Hunza among other Northern parts of Pakistan.

'This is the third time I am in Pakistan. I have hunted almost all animals here' 😡😡😡😡😡

Markhors are prized for their famous horns, which can reach 45 inches in height—with the record topping out at 60 inches over a century ago. Poachers have been known to target the animal to sell the horns into the Asian medicine market.

With estimates of a population of only around 6,000 in the mountains of Pakistan and Afghanistan, markhors are protected by law in Pakistan.

Shooting markhors without a license also carries a high price tag. Last year, a poacher was ordered to pay $175,650 in compensation for killing two markhors and was sentenced to jail for two years, according to Dawn.

The National Parks of Pakistan said in a statement, “Annually, four hunting trophy licenses are issued for markhor hunting and 80 percent of the money collected is distributed among the local community, whereas 20 percent is kept by the wildlife department.”

The four licenses are granted for only one male and for overage markhors with specified conditions.

But some campaign groups, such as Born Free, are opposed to all trophy hunting. Born Free labels trophy hunting as a “cruel throwback to a colonial past,” arguing that it disrupts animal societies and has hidden knock-on effects for populations and ecosystems.

A post on Huntshack defends the practice of markhor hunting.

“Despite the Disney images of the animal kingdom, these older males do not live out their golden years in peace, dying peacefully under a tree surrounded by a loving herd. Instead, they often die of starvation because their teeth are so badly worn down they can no longer feed properly, they become easy game for predators, or they are challenged, defeated and killed by the younger males,” it states on its website.

Countries take different approaches to legal trophy hunting. In Kenya, all trophy hunting has been banned since 1977, whereas South Africa allows trophy hunting of the Big Five species:  the lion, leopard, rhinoceros, elephant, and Cape buffalo.