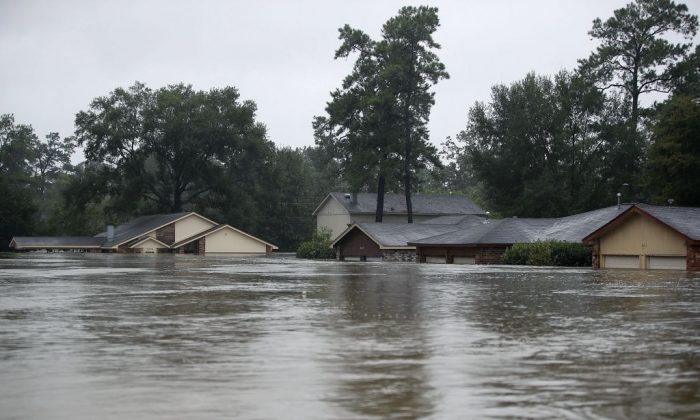 Homes are seen inundated with flooding from Hurricane Harvey on August 28, 2017 in Houston, Texas. Harvey, which made landfall north of Corpus Christi late Friday evening, is expected to dump upwards to 40 inches of rain in Texas over the next couple of days. (Joe Raedle/Getty Images)
US

Hurricane Harvey devastated Texas after it made landfall on Saturday, Aug. 26, claiming 14 lives across the state and forcing 30,000 people to evacuate in Houston alone.

When Thomas Edwards, 17, woke up he found his truck submerged in water. Instead of letting fear take control, the teen got together with three of his friends to help rescue stranded neighbors.

Edwards and his friends Richard Dickason, 17, Liam Connor, 17, and Declan Connor, 15, had picked up Declan’s small fishing boat from Galveston, Texas, the day before the storm, Daily Wire reported.

When their neighborhood flooded, the water lifted the boat from the trailer and the teens decided to venture out to help stranded neighbors.

“We could hear people screaming for help and we towed a paddle board behind us so we could fit more people on the boat,” Edwards told The Daily Wire.

“We began to pick people up and take them to a local Krogers, where other evacuees sought refuge. We were the only boat in the neighborhood until 2 o’clock, and we motored back and forth making trips to rescue as many people as we could,” he said.

Edwards and his friends are all students at the Strake Jesuit College Preparatory in Houston. The president of the school, Jeff Johnson, praised the teens’ brave actions.

“He is a brave young man and I cannot tell you how proud of him I am,” Johnson wrote in a blog post.

The teens saved over 50 people, according to Edwards. They worked in collaboration with firefighters, police, and rescue workers.

“Neighbors would tell us addresses or point in directions to where they heard people yelling from,” Edwards said.

“We rescued families, babies, dogs, rabbits, you name it,” Edwards said. “My friend Liam and I would stay on the paddle board and pull the boat across the intersection in order to unload people closer to the Kroger parking lot. It was an incredibly surreal experience to take a boat down streets while trying to dodge sunken cars and overhanging tree limbs.”

The teenagers were inspired by comments from people on social media after local photojournalist Mark Mulligan posted photos of them on Twitter.

“People were calling us patriots, fine young men, and heroes,” Edwards said. “All of these comments bolstered our morale and let us know that what we were doing did not go without recognition, although we would have done so regardless.”

Edwards told the Daily Wire that one comment resonated with him in particular.

“Someone said that in times like these, differences don’t matter because we are all in the same predicament,” Edwards said. “I thought it was incredibly valiant to see how the whole community banded together to save one another.”