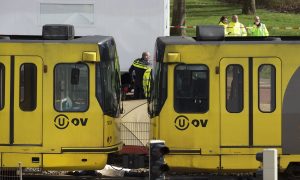 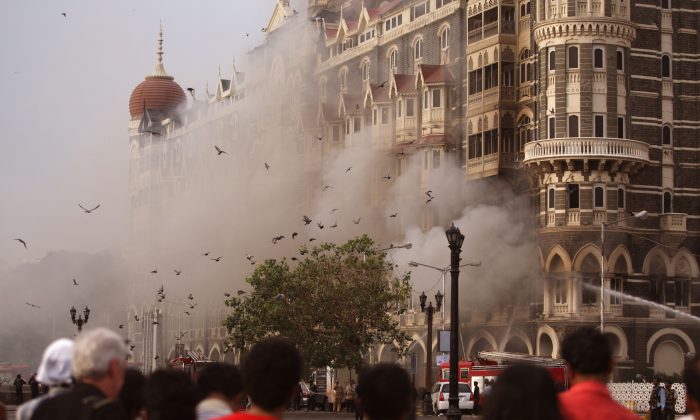 Locals look at a fire as it burns at Taj Mahal Palace following an armed siege in Mumbai, India, on Nov. 29, 2008. (Uriel Sinai/Getty Images)
Crime and Incidents

A Texas teenager who tried to recruit a fellow American to a jihadi terrorist organization has been sentenced to 20 years in jail on terrorism charges.

Michael Kyle Sewell, 18, was arrested in February after exchanging messages with federal agents who were posing online as contacts for Lashkar-e-Taiba, a terrorist organization also known as LeT.

Pakistan-based LeT has been behind a number of deadly attacks since 1999, including the four attacks in Mumbai in November 2008 that killed more than 160 people.

Sewell had pleaded guilty to the charges, admitting to encouraging an individual to join LeT, and providing him with contact information for a facilitator who said he could help him travel to Pakistan to join LeT, according to the Department of Homeland Security.

Unbeknownst to Sewell, the LeT contact was an undercover FBI employee. Sewell told the undercover agent that he could vouch for the new recruit, and promised to kill him if he turned out to be a spy.

According to the New York Post, citing court papers, Sewell said he wanted to join LeT, but needed several years to first have eye surgery to improve his vision, save up for the airfare, and get in shape.

Sewell also contacted an unidentified U.S. citizen whose social media account featured an ISIS flag, to persuade him to join LeT or the Taliban instead, since ISIS “had no territory.”

“Sewell also conducted internet searches suggesting that he was investigating ways to carry out such attacks,” the Homeland Security statement said. A search of Sewell’s home revealed an AR-15 style rifle, multiple magazines, and a number of knives in Sewell’s bedroom.

“This case demonstrates how an American citizen can be radicalized by a violent ideology based upon hate and how the actions of the FBI and our partners on the Joint Terrorism Task Force worked tirelessly to prevent violence here and abroad,” said U.S. Attorney Erin Nealy Cox in a statement.

LeT is designated as a terrorist organization by the United States, along with its various aliases.

According to the Counter Extremism Project, LeT is a “violent Islamist” group with roots in the Pakistani group known as Markaz-ad-Dawa-wal-Irshad, which was founded in 1989 by the religious mentor of Osama bin Laden.

“According to a LeT pamphlet, the group’s activities in Jammu and Kashmir are part of a broader goal to reestablish Islamic rule in India and other historically ‘Muslim lands,'” the Counter Extremism Project states.

“In the years following the 2001 U.S. invasion of Afghanistan, LeT reportedly provided refuge and training to al-Qaeda members in Pakistan, as well as fighters and weapons to the Afghan front.”