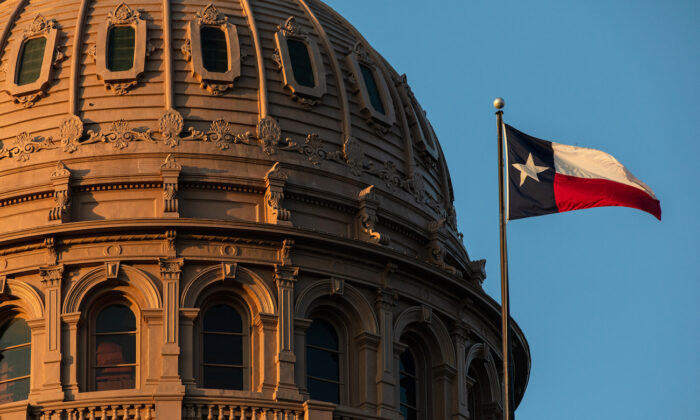 The Texas State Capitol is seen on the first day of the 87th Legislature's third special session in Austin, Texas, on Sept. 20, 2021. (Tamir Kalifa/Getty Images)
US News

A Texas Supreme Court ruled Friday that the state could continue to resume investigating parents for child abuse if they facilitate “gender-affirming” treatment for transgender children.

A lower court judge reimplemented a temporary injunction in March, blocking Texas child abuse investigations of the families of transgender children. That prompted the state to file its case with its Supreme Court.

The state’s highest court ruled (pdf) that the lower court’s injunction was overreaching when it halted investigations into those families, adding that it was “was outside of the court of appeals’ authority to protect parties’ rights.” The family who filed the initial lawsuit is protected under the injunction, according to the Supreme Court.

“The Court also granted mandamus relief as to the parts of the court of appeals’ order binding the governor, as the governor does not have authority to investigate, prosecute, or impose reporting requirements regarding child abuse allegations. Lastly, the Court denied the state relief as to the order’s impact on the plaintiffs,” the ruling said.

While Texas Gov. Greg Abbot and Attorney General Paxton have the right to have certain opinions, Texas’s child welfare agency is “not compelled by law to follow them,” the Supreme Court also wrote.

On Feb. 22, Abbott, a Republican, issued a directive that told the Department of Family and Protective Services to investigate reported instances, including administering puberty-blocking drugs and hormone treatment in children. It came as Paxton, also a Republican, issued an opinion (pdf) stating that such treatments are “non-medically necessary” and could be considered child abuse under Texas’s penal code.

“It is already against the law to subject Texas children to a wide variety of elective procedures for gender transitioning, including reassignment surgeries that can cause sterilization, mastectomies, removals of otherwise healthy body parts, and administration of puberty-blocking drugs or supraphysiologic doses of testosterone or estrogen,” said Abbott in his order.

The American Civil Liberties Union (ACLU) and Lambda Legal sued Texas on March 1 on behalf of the family of a 16-year-old transgender child after a child welfare official arrived at their home following Abbott’s order.

Meanwhile, some medical experts have voiced concerns about children receiving puberty-blocking drugs and hormones as studies have shown that children with gender dysphoria tend to outgrow it.

“If you just leave them alone, and don’t put them through hormones and chemicals and social transition, they’ll revert to believing that they are their natural sex,” Dr. Michael Laidlaw, an endocrinologist based in California, told The Epoch Times in early April about a separate case. “But, once they’re on puberty blockers, a very high percentage—over 95 percent—do not choose to go off of these blockers, and then they go on to these cross-sex hormones, which I call wrong-sex hormones.”

Another, Patrick Lappert, a plastic surgeon with Lappert Skin Care in Alabama, told The Epoch Times that “gender-affirming” care can be a form of grooming that leads to more and more therapeutic interventions, including puberty blockers and hormones.

“It appears to have solved the problem because the child feels better, but they also prepare the child to anticipate that when puberty comes, they’re going to be put on puberty blockers,” he said on April 13 regarding such treatments. “So when the child first starts manifesting signs of puberty, it’s going to provoke renewed anxiety.”

Lappert argued that “parents are as much victims of this idea of this as the child is” because they are “victimized by this idea that there is only one course of treatment and it’s got to be (gender) affirmation.”