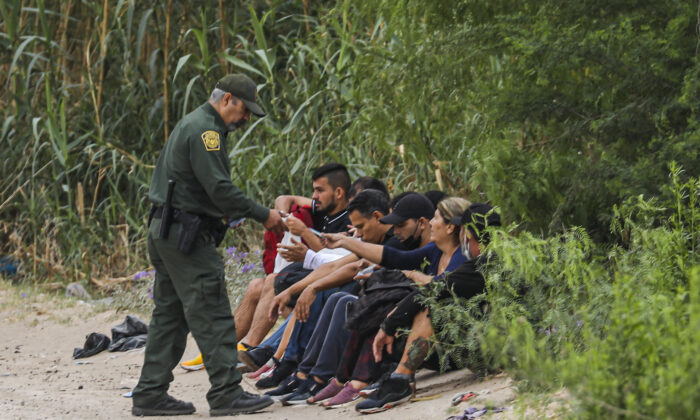 The state of Texas on April 22 lodged a legal action against President Joe Biden’s administration, urging a federal court to postpone or block the looming end of emergency border powers.

The powers, known as Title 42, were imposed during the Trump administration and repeatedly extended. They allow immigration enforcement agencies to quickly expel many illegal immigrants because of concerns the immigrants carry the CCP (Chinese Communist Party) virus, which causes COVID-19.

The Centers for Disease Control and Prevention (CDC) determined on April 1 that Title 42 is no longer necessary and is ending the order enabling the powers on May 23. The decision has been backed by the Department of Homeland Security (DHS) and the White House.

In an emergency motion, Texas Attorney General Ken Paxton said that the government violated federal law that requires certain actions while issuing or rescinding rules, such as accepting comments from the public.

Additionally, the government’s ending of Title 42 while keeping other pandemic-era orders in place, such as one that requires all people entering through ports of entries at the northern or southern borders to have received a COVID-19 vaccine, “reveals unexplainable and irrational inconsistencies,” Paxton, a Republican, wrote.

“There is simply no basis for holding authorized immigrants and visitors to a higher standard than aliens who enter the United States illegally,” he said.

If the end date of Title 42 is not pushed back, Texas will face elevated healthcare costs due to the higher number of illegal aliens with COVID-19 who would have been expelled under Title 42, plaintiffs say.

The Department of Justice declined to comment. The CDC did not respond to a request for comment.

In her order justifying the end of Title 42, CDC Director Rochelle Walensky claimed that the move was made because COVID-19 cases, hospitalizations, and deaths have plunged since January and due to “an increased availability of tools to fight COVID-19 (such as highly effective vaccines and therapeutics).”

The current slate of COVID-19 vaccines protect poorly against CCP virus infection and transmission, while some of the cleared treatments have been rendered less or ineffective against the most recent strains of the virus.

In a filing this week, the attorneys general said government lawyers confirmed to them that utilization of the emergency powers is already ending, and urged the court to temporarily block the administration from doing so until the case is adjudicated.

“Plaintiff states are substantially likely to prevail on the merits of their claims and temporary injunctive relief is necessary to maintain the status quo and avoid substantial injuries to plaintiff states’ sovereign, quasi-sovereign, and proprietary interests,” they said.

Blas Nuñez-Neto, acting assistant secretary for border and immigration policy at DHS, confirmed the agency has begun shifting how it processes some illegal immigrants.

“As part of the efforts to prepare for the ultimate lifting of Title 42, DHS has begun in recent weeks to increase the use of expedited removal for some single adults eligible for removal who would otherwise be expelled pursuant to Title 42,” he said in an affidavit. Expedited removal means an immigrant can claim asylum and receive an interview before being expelled.

But the government said the court should not grant the states’ request, arguing that the end date of the emergency powers was set for next month because the administration must take steps to prepare for the border situation to return to normal.