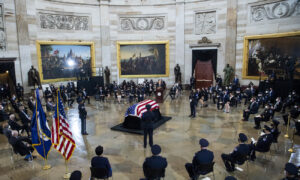 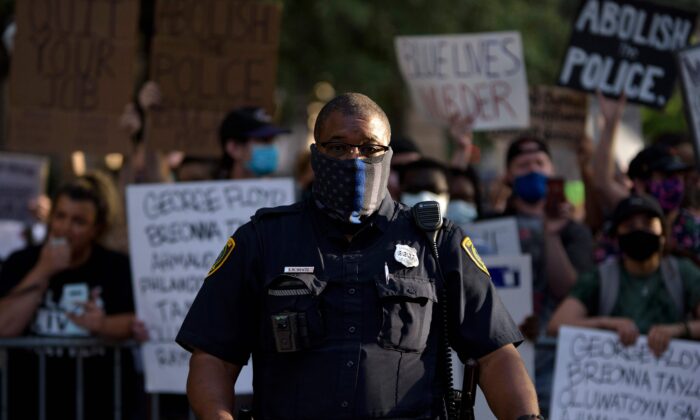 A police officer stands between Police Appreciation rally attendees and counter-protesters at the City Hall in Houston, Texas, on June 18, 2020. (Mark Felix/AFP via Getty Images)
Texas

The Texas Senate on Tuesday passed a bill that would block local governments from reducing their law enforcement budgets without voter approval, in the Republican-led state legislature’s latest pushback against calls to “defund the police.”

Senate Bill 23, which passed the state Senate in a bipartisan 28-2 vote, requires a local election before any city or county in Texas can cut law enforcement funds as a percentage of its overall budget, lower the number of officers, or reduce funds per officer for training and recruitment.

Under the bill, a citizen complaint would be able to trigger an investigation by the Criminal Justice Division of the governor’s office to determine whether a local government had cut police spending without an election. If the complaint is determined to be valid, the Texas Comptroller of Public Accounts could issue a penalty that bans the municipality from raising property tax until the budget is restored.

“This sends a message to the citizens that we are going to back the blue,” Huffman said on the Senate floor, reported The Texas Tribune. “That’s what this bill intends to do.”

The bill comes as Texas Gov. Greg Abbott urges the state legislature to take actions to resist the widespread “Defund the Police” movement. The Republican governor said last year that he would back legislation to freeze property tax revenues for cities that “puts residents in danger” by cutting police budgets.

In August 2020, the Austin City Council unanimously voted to cut its police department budget by one-third, or $150 million. About $20 million in the police budget decrease came from re-allocating money to subsidize social services programs, including abortion. Another $50 million came from creating a safety fund that will divert money “toward alternative forms of public safety and community support.” The other $80 million was shifted from the police department budget by moving some offices to civilian control.

In September, the Dallas City Council narrowly voted to increase the police funding by nearly $8 million, but only after cutting $7 million from the $24 million set as overtime pay for police officers.