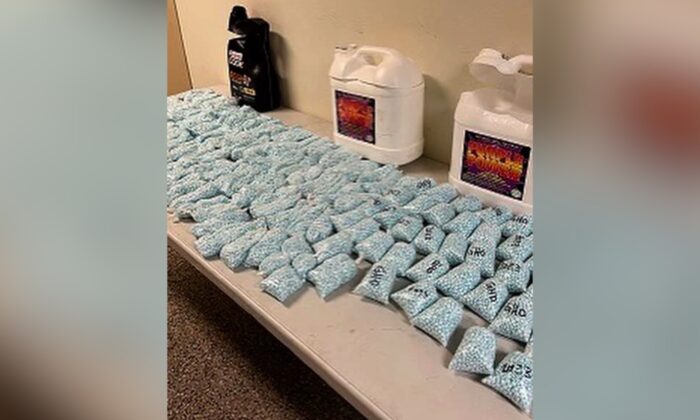 Texas Sheriff: Fentanyl Should Be Classified as ‘Weapon of Mass Destruction’

Montgomery County Sheriff Rand Henderson in Texas said that fentanyl coming across the U.S.–Mexico border should be deemed a “weapon of mass destruction” (WMD).

“Fentanyl is poison that’s being introduced to our country. The illicit manufacturing of this stuff has just gotten crazy with the potency of it,” he told Fox News over the weekend. “The deception by the drug dealers to mix it into the pressed pills trying to sell it as a legal drug that’s a prescription medication.”

Elaborating on the danger, Henderson said that “it only takes 2 milligrams of this stuff to kill you and we’re finding twice, sometimes three times the amount of fentanyl in a pill that’s not supposed to contain any fentanyl.” The county that he oversees is located in southeastern Texas, although it’s hundreds of miles from the border.

“There is no quality control standard. It is truly a weapon of mass destruction that’s killing our population,” he added. “I thought I would never see anything worse than methamphetamines, which has been a horrible scourge on our population,” the sheriff continued, calling for it to be labeled a WMD.

According to the Department of Homeland Security, a WMD is a “nuclear, radiological, chemical, biological, or other device that is intended to harm a large number of people.”

The term gained popularity in the aftermath of the Sept. 11 attacks and during reports about whether the Saddam Hussein regime possessed one, launching the 2003 U.S. invasion of Iraq.

Under the Trump administration, Homeland Security officials reportedly considered labeling fentanyl as a WMD. Rep. Lauren Boebert (R-Colo.) recently introduced a bill to classify the powerful synthetic opioid as one.

“Fentanyl is America’s silent killer and is now the leading cause of death for Americans aged 18 to 45,” she told The Hill in June. “The saddest thing about the fentanyl crisis is that it is preventable.”

Much of the production of fentanyl starts in China, where laboratories create precursor chemicals that are needed to manufacture the drug, according to the Center for Strategic and International Studies think tank. The two most common ingredients are N-phenethylpiperidone and 4-anilino-N-phenethylpiperidine.

The compounds are then shipped to Mexico where cartels manufacture the drug before it is transported illegally across the border into the United States, according to Drug Enforcement Agency (pdf) in a 2020 report. The notorious Sinaloa and the New Generation Jalisco cartels are “likely the primary trafficking groups responsible for smuggling fentanyl into the United States from Mexico.

“While Mexico and China are the primary source countries for fentanyl and fentanyl-related substances trafficked directly into the United States, India is emerging as a source for finished fentanyl powder and fentanyl precursor chemicals,” the DEA also wrote.