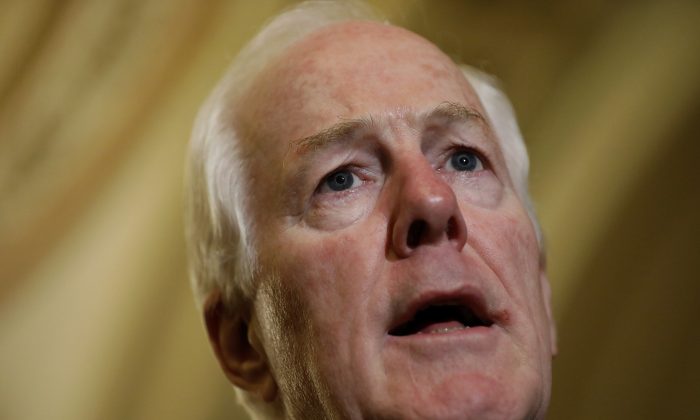 WASHINGTON—The U.S. Senate’s  number 2-ranking Republican, John Cornyn, said that a bill he has introduced will prevent foreign investments in the United States that pose a risk to national security. In a speech on Nov. 14, Cornyn painted China as the source of the national security risks the bill seeks to address, and said that it’s “time to wake up” to the mounting risks of China’s incursions into U.S. economy.

The bill, known as the Foreign Investment Risk Review Modernization Act (FIRRMA), was introduced last week by Sen. John Cornyn of Texas and co-sponsored by a bipartisan group of heavyweight senators including Dianne Feinstein (D-Calif.) and Richard Burr (R-NC), the chairman of the Senate intelligence committee. Republican Representative Robert Pittenger of North Carolina also introduced an identical bill in the House.

While the bill does not specifically name China, it is clearly in the crosshairs. In the keynote address Cornyn delivered at the Center for Strategic and Independent Studies second annual “China’s Power” conference on Nov. 14, he pointedly blamed China for having committed much mischief against the interests of the U.S. economy and national security.

“It’s time for the U.S. to adopt a new policy on China, one that doesn’t shrink from China’s challenges,” said Cornyn.

The bill would empower CFIUS to stop smaller investments than the ones it usually reviews, and would add new national security factors for CFIUS to consider, including whether information about Americans, such as Social Security numbers, would be exposed to foreign actors as a result of the investment deal.

Cornyn said that he does not seek to bar all Chinese investments but only those that pose threats to U.S. interests. However, Cornyn stressed the urgent need for action as China is “vacuuming up U.S. technologies whenever it can” and that China could conceivably use technologies stolen from the United States against it in a conflict.

“China, too often, requires technology transfer as a quid pro quo for U.S. companies to access its own market. This approach puts the Chinese Communist Party in the boardroom of nearly every U.S. multinational company in the high-tech sector.” Said John Cornyn.

Cornyn said he hoped for a Senate hearing on the bill before the end of the year and committee action soon after. With the backing of a bipartisan group of influential senators the bill may encounter few obstacles within Congress. A vote in both chambers could be just a couple months away.