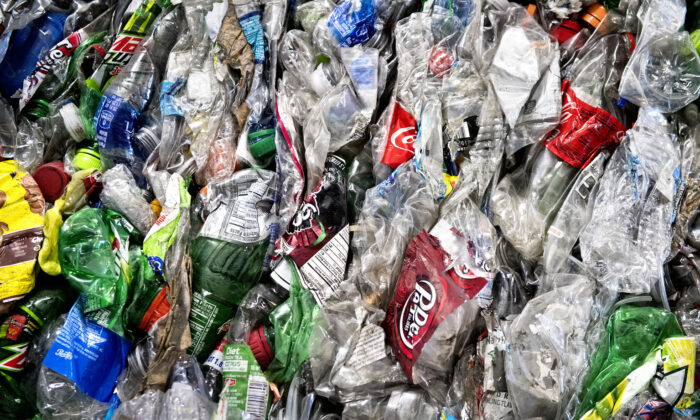 An enzyme that can chemically break down bottles and packaging that typically take centuries to degrade may be able to clean up billions of tons of plastic at landfills and other polluted sites, according to researchers at the University of Texas.

Engineers and scientists at the university’s Cockrell School of Engineering and College of Natural Sciences created the “plastic-eating enzyme” using a machine learning model to generate novel mutations to a natural enzyme called PETase.

The enzyme PETase allows bacteria to degrade PET plastics (polyethylene terephthalate) which are commonly used for packaging foods and beverages, among other things.

According to researchers, the machine learning model predicts which mutations in these enzymes would “accomplish the goal of quickly depolymerizing post-consumer waste plastic at low temperatures.”

The university said that the enzyme PETase was able to complete a “circular process” consisting of breaking down the plastic into smaller parts, and then chemically putting it back together, a process that is also known as repolymerization.

In some cases, these plastics, which typically take centuries to degrade, could be fully broken down within just 24 hours.

Researchers studied 51 different plastic containers, five polyester fibers and fabrics, and water bottles made from PET and were able to prove the effectiveness of the enzyme, which they have named “functional, active, stable and tolerant PETase” or “FAST-PETase” for short.

Their findings were published in Nature on April 27 (pdf) and mark a huge step forward in the effort to find biological solutions to recycle plastics, although scientists in Australia are also developing a plastic-eating enzyme that they say is similar to the pellet-eating video game character Pac-Man and works within an hour.

According to the United Nations Environment Program (UNEP), 400 million tons of plastic waste are produced each year.

Globally, less than 10 percent of all plastic has been recycled, the university said, adding that the most commonly used method involves throwing it in a landfill and burning it. However, this method is both costly and harmful to the environment as it generates toxic gas in the air.

Other industrial processes used to recycle plastics are energy-intensive.

Researchers noted that until their discovery, “no one had been able to figure out how to make enzymes that could operate efficiently at low temperatures to make them both portable and affordable at a large industrial scale.”

The FAST-PETase enzyme can perform this process at less than 50 degrees Celsius.

“The possibilities are endless across industries to leverage this leading-edge recycling process,” Hal Alper, professor in the McKetta Department of Chemical Engineering at the University of Texas in Austin said in a statement. “Beyond the obvious waste management industry, this also provides corporations from every sector the opportunity to take a lead in recycling their products. Through these more sustainable enzyme approaches, we can begin to envision a true circular plastics economy.”

Researchers are currently working on scaling up the enzyme for industrial and environmental use and have filed a patent application for the technology, which would likely be used to clean up landfills and polluted sites.

French biotechnology company Carbios is also using enzymatic recycling to speed up the process and said it is ready to scale up this year.